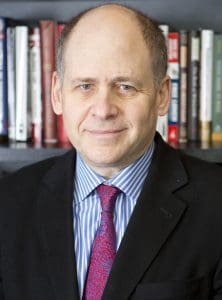 You are invited to a private dinner with writer Jonathan Alter.

The dinner will be hosted by Elizabeth and Dale Hemmerdinger at their Central Park South home on Monday, February 13th at 7:30pm.

Jonathan Alter will discuss his body of work and his most recent writings regarding the 2016 U.S. Presidential Election.

Jonathan Alter is an award-winning author, reporter, columnist, television producer, and analyst. He is the author of three New York Times bestsellers: The Center Holds: Obama and His Enemies (2013), The Promise: President Obama, Year One (2010) and The Defining Moment: FDR’s Hundred Days and the Triumph of Hope (2006), also one of the Times‘ “Notable Books” of the year. Since 1996, Alter has been an analyst and contributing correspondent for NBC News and MSNBC, appearing on-air two or three times a week. After 28 years as a columnist and senior editor at Newsweek, where he wrote more than 50 cover stories, Alter is now a twice-monthly columnist for the Daily Beast. He has also written for The New York Times, The Washington Post, The Washington Monthly, Rolling Stone, The Atlantic, The New Yorker, Vanity Fair, The New Republic, Esquire, Bloomberg View, and other publications. He is an executive producer of “Alpha House,” a half-hour political comedy created by Garry Trudeau and starring John Goodman that is available for viewing on Amazon.com.