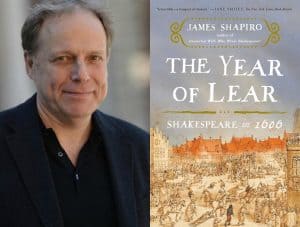 You are invited to a private dinner with Columbia professor and prominent Shakespeare scholar James S. Shapiro.

The dinner will be hosted by Sharon Ruwart and Tom Melcher at their Upper West Side home on Monday, February 6 at 7:30pm.

James will discuss his latest work, The Year of Lear: Shakespeare in 1606, which demonstrates how the tumultuous events in 1606 influenced three of Shakespeare’s greatest tragedies — King Lear, Macbeth, and Antony and Cleopatra, all written in that year. The New York Times says “with consummate skill and in a friendly and evocative style,” Shapiro “sort[s] through the information that has emerged from old libraries and dusty archives in the last 50 years, and then he brings it alive in a smooth, lively and conversational style. He brings Shakespeare himself alive by demonstrating how the playwright’s mind worked over not only events but also other writers’ perceptions…He quotes from the sources, such as ‘King Leir,’ and then shows how Shakespeare’s genius lay not in originating, but in shaping, cutting, modifying and giving life and poignancy to the material at hand, in communicating his own feelings and opinions about issues that are not just universal but also painfully present.”

James S. Shapiro is Professor of English and Comparative Literature at Columbia University. He specializes in Shakespeare and the Early Modern period and has published several books on these topics.