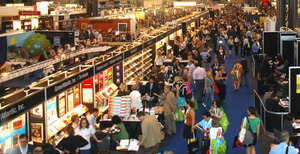 Join PEN America’s Translation Committee at BookExpo America 2015. The committee will again bring together its talented members with seasoned editors and publishers for three brief, informative panels focused on topics of perennial interest to those concerned with the art and profession of literary translation.

Wednesday, May 27, 4:00pm
RETRANSLATING THE GREAT WORKS OF LITERATURE: HOW AND WHY?
Are you a publisher thinking about bringing out a great work of literature in a new translation? Are you a translator thinking of picking up a great work and “making it new”? Either way, this panel will help you work through the many decisions you will have to face. Translator Tess Lewis talks to translator Burton Pike (Goethe, Musil) and editor-publisher Robert Weil (Liveright & Co.). Presented by the PEN America Translation Committee.

Tess Lewis is a writer and translator from French and German. She has translated works by Peter Handke, Pascal Bruckner, and Jean-Luc Benoziglio, among others. Her recent awards include a Max Geilinger grant, the ACFNY Translation Prize, and a Guggenheim Fellowship. She is an advisory editor for The Hudson Review.

Burton Pike is Professor Emeritus of Comparative Literature at the Graduate Center of the City University of New York. His translations include Goethe’s The Sorrows of Young Werther, Robert Musil’s The Man Without Qualities (PEN Translation Prize special citation) and Precision and Soul, Rainer Maria Rilke’s The Notebooks of Malte Laurids Brigge, Gerhard Meier’s Isle of the Dead (Helen and Kurt Wolff Translation Prize), and a “lost” story by Proust.

Robert Weil is the editor-in-chief and publishing director of Liveright & Co., a division of W.W. Norton. Long a champion of books in translation, Weil has edited and overseen numerous translations of nonfiction, fiction, and poetry for the American market over the last 30 years, most notably nine books of Joseph Roth’s and The Complete Works of Isaac Babel. This fall he is publishing the three-volume Complete Works of Primo Levi, the culmination of a 16-year-long project to translate all of Levi’s writings from the Italian.

Thursday, May 28, 10:00 am
REACHING THE READER: PUBLICIZING INTERNATIONAL LITERATURE

Until a book reaches readers, it’s only been printed, not published. Literature in translation is more popular than ever before, but there are also more books out there to compete with. What are some successful ways translators and the publishers who bring out their works can draw attention to books and find the readers who will love them? Allison Markin Powell, translator of Japanese, talks to Juliet Grames, associate publisher of Soho Press. Presented by the PEN America Translation Committee.

Allison Markin Powell is a literary translator and editor in New York City. Her translation of The Briefcase (Strange Weather in Tokyo) by Hiromi Kawakami was nominated for the 2012 Man Asian Literary Prize and the 2014 Independent Foreign Fiction Prize. She has also translated works by Osamu Dazai and Fuminori Nakamura, among others.

Juliet Grames is associate publisher at Soho Press, where she also acquires and edits the Soho Crime imprint of international and multicultural crime fiction.

Friday, May 29, 10:00 am
BAITING THE HOOK: HOW TO CATCH AN EDITOR’S INTEREST
Most literary translators don’t have an agent to represent them and so have to query potential publishers directly. What’s the best way to make sure a translation proposal gets the attention it deserves? Former agent and editor turned literary translator Ezra Fitz talks with Grove Atlantic editor Corinna Barsan about the key elements a good pitch letter should contain, and what, besides the project itself, a translator can bring to the table to help turn a proposal into a published book. Presented by the PEN America Translation Committee.

Ezra E. Fitz is the translator for Grammy-winning musician Juanes, Emmy-winning journalist Jorge Ramos, and contemporary Latin American novelists Alberto Fuguet and Eloy Urroz. He is also the author of an original novel, The Morning Side of the Hill, published in 2014.