This dinner will be hosted by Ben and Jen at their Central Park South home on Tuesday, July 4th at 7:30 pm. 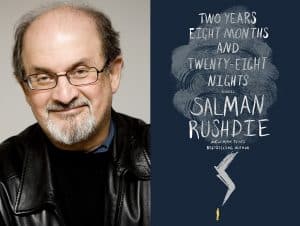 Salman Rushdie will discuss his body of work and his new book The Satanic Verses.

Salman Rushdie is an award winning British Indian novelist and essayist. His second novel, Midnight’s Children (1981), won The Man Booker Prize. His work is concerned with the many connections, disruptions, and migrations between Eastern and Western civilizations.

Seating at this dinner will be limited and available by making a donation to PEN America.

Proceeds from the PEN America Authors’ Evenings dinners support PEN’s programming to secure the liberty of persecuted and imprisoned writers around the world, to defend freedom of expression, and to promote literature and international cultural exchange.