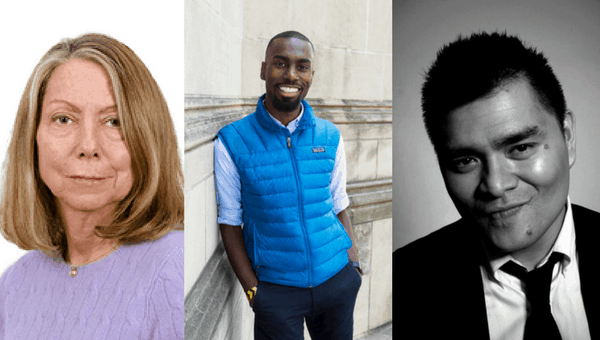 PEN America and Book Expo will co-host a panel discussion entitled “PEN America Presents: Can Free Speech be Saved?” with Jill Abramson (The Merchants of Truth: The Business of Facts and the Future of News), DeRay Mckesson (On the Other Side of Freedom: The Case for Hope), and Jose Antonio Vargas (Dear America).

Speakers will explore the ongoing debate around free speech and the ways in which it is appropriated across the political spectrum and in the public square. In the Trump era, can free speech survive such severe attacks, especially when coming from the highest branch of government? How is the fourth estate and the judicial branch responding to the new war on the First Amendment, truth, and the democratic process?

Jill Abramson is a senior lecturer at Harvard University. She also writes a bi-weekly column for The Guardian about U.S. politics. She spent 17 years in the most senior editorial positions at The New York Times, where she was the first woman to serve as Washington bureau chief, managing editor, and executive editor. Before joining the Times, she spent nine years at The Wall Street Journal. The author of News Wars, she lives in New York City.

DeRay Mckesson is a civil rights activist focused primarily on issues of innovation, equity, and justice. Born and raised in Baltimore, Maryland, he graduated from Bowdoin College and holds an honorary doctorate from The New School.

Jose Antonio Vargas is a Pulitzer Prize-winning journalist, Emmy-nominated filmmaker, and a leading voice for the human rights of immigrants. He is the founder and CEO of Define American, the nation’s leading nonprofit media and culture organization that fights injustice and anti-immigrant hate through the power of storytelling. His forthcoming memoir, Dear America: Notes of an Undocumented Citizen, will be published by HarperCollins in fall 2018.