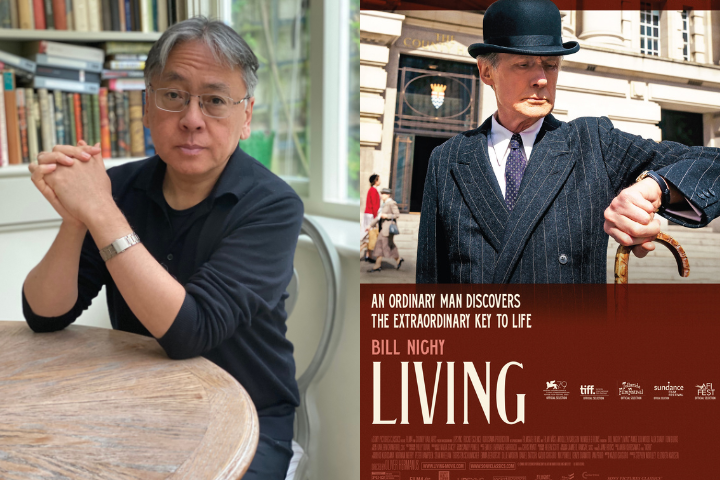 Join us for an intimate evening with Kazuo Ishiguro in conversation with Tom Perrotta about Ishiguro’s screenplay for Living, starring Bill Nighy, and about Ishiguro’s remarkable career and the relationship between novel-writing and film-making. This promises to be a fascinating evening, and we hope that you will join us. This evening is being generously hosted by Boykin Curry.

Ishiguro’s works of fiction have earned him many honors around the world, including the Nobel Prize in Literature and the Booker Prize. His work has been translated into over fifty languages, and The Remains of the Day and Never Let Me Go, both made into acclaimed films, have each sold more than 2 million copies. He was given a knighthood in 2018 for Services to Literature. He also holds the decorations of Chevalier de l’Ordre des Arts et des Lettres from France and the Order of the Rising Sun, Gold and Silver Star from Japan. His screenplay for Living is based on the Akira Kurosawa classic, Ikiru, which was inspired by The Death of Ivan Ilych by Tolstoy.

Ishiguro will be discussing his illustrious career as a novelist and screenwriter with Tom Perrotta, whose novels, including Election, Little Children and The Leftovers, have been made into critically-acclaimed, Academy Award-nominated films and Emmy-nominated series. Perrotta was nominated for an Oscar for his adaptation of Little Children.

Tickets are $1,000 to attend this evening. Following your RSVP, you will be sent the address for the dinner. The donation is considered 100% tax-deductible and supports PEN America’s mission to defend writers and free expression at a time of unprecedented need. Your generosity is deeply appreciated.

If you have any questions, please contact Christy Wensley at [email protected].

Proceeds from the PEN America Authors’ Evenings support PEN America’s programming to secure the liberty of persecuted and imprisoned writers around the world, to defend freedom of expression, and to promote literature and international cultural exchange.