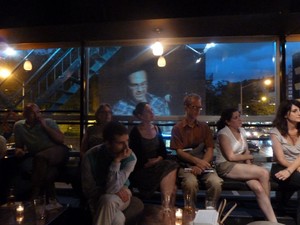 There will be excellent nonfiction, $4 whiskey specials, and a 50-foot live projection of some of New York’s literary finest. 2A is located at the corner of Second St. and Avenue A, in the upstairs bar. Books will be for sale, courtesy of McNally Jackson.

Nearest subways include the F at 2nd Avenue, the 6 at Bleecker, the BD at Grand or the JMZ at Essex.

André Aciman is an American memoirist, essayist, novelist, and Distinguished Professor of Comparative Literature at The Graduate Center of The City University of New York. He is the author of the Whiting Award-winning memoir Out of Egypt, an account of his childhood as a Jew growing up in post-colonial Egypt, and two novels, Eight White Nights and Call Me By Your Name, for which he won the Lambda Literary Award for Men’s Fiction. His other books include two essay collections, False Papers: Essays in Exile and Memory and Alibis: Essays on Elswhere, which was a runner-up for the PEN/Diamonstein-Spielvogel Award for the Art of the Essay in 2012. His forthcoming novel Harvard Square will be published this spring by  W.W. Norton and Company.

Siddhartha Deb is the author of two novels, The Point of Return, which was a 2003 New York Times Notable Book of the Year, and An Outline of the Republic. His reviews and journalism have appeared in The Guardian, The New York Times, Harper’s Magazine, The Nation, New Statesman, n+1, and The Times Literary Supplement. His book, The Beautiful and the Damned: A Portrait of the New India, had its first chapter removed from the Indian edition by a court order. It was a finalist for the Orwell Prize for Political Writing and was the winner of the 2012 PEN Open Book Award, which honors an exceptional work of literature by a writer of color.

Kathryn Harrison is the author of the novels Envy, The Seal Wife, The Binding Chair, Poison, Exposure, and Thicker Than Water. She has also written three memoirs, The Kiss and The Mother Knot, a travel memoir, The Road to Santiago, a biography, Saint Therese of Lisieux, and a collection of personal essays, Seeking Rapture. She writes regularly for the New York Times Book Review and her essays have appeared in The New Yorker, Harper’s Magazine, Vogue, O Magazine, Salon, and other publications. Her latest book is Enchantments, to be published by Random House in March. She lives in New York with her husband, the novelist Colin Harrison, and their children.

Reif Larsen is the author of the New York Times-bestselling novel The Selected Works of T.S. Spivet, which was shortlisted for the Guardian First Book Award, translated into twenty-nine languages, and is being adapted for the screen by Jean-Pierre Jeunet (Amelié). Larsen’s essays and fiction have appeared in Tin House, One Story, The Millions, Asymptote, and The Believer. He lives in the Hudson Valley and is at work on a novel about genocide and electromagnetism.