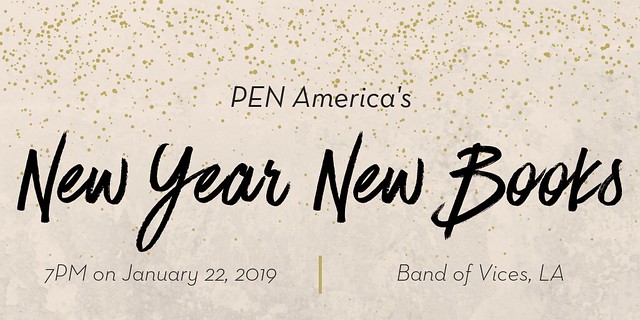 PEN America Members and supporters celebrated the New Year at the annual New Year New Books party‘s Los Angeles debut! Hosts Shauna Barbosa, Ingrid Rojas Contreras, Franklin Leonard, Susan Orlean, and Michelle Tea joined in raising a glass to your favorite books of 2018. Guests mixed and mingled with acclaimed writers, journalists, editors, agents, translators, and publishers and received personalized poem from the Melrose Poetry Bureau. Thanks to all who joined us for this lively celebration of literary community!

Shauna Barbosa is the author of the poetry collection Cape Verdean Blues (University of Pittsburgh Press, 2018). Her poems have appeared or are forthcoming in The Southeast Review, Virginia Quarterly Review, Tupelo Quarterly, Boulevard, Poetry Society of America, PBS Newshour, Lit Hub, Lenny Letter, and others. She is a semi-finalist for PEN America’s 2019 Open Book Award and was a 2018 Disquiet International Luso-American fellow. Shauna received her MFA from Bennington College in Vermont and currently resides in Los Angeles, California, where she teaches Creative Writing in the Writers’ Program at UCLA Extension.

Ingrid Rojas Contreras was born and raised in Bogotá, Colombia. Her first novel Fruit of the Drunken Tree (Doubleday) is an Indie Next selection, a Barnes & Noble Discover Great New Writers selection, and a New York Times editor’s choice. Her essays and short stories have appeared in the New York Times Magazine, Buzzfeed, Nylon, and Guernica, among others. Rojas Contreras has received awards and fellowships from Bread Loaf Writer’s Conference, VONA, Hedgebrook, The Camargo Foundation, and the National Association of Latino Arts and Culture. She is the book columnist for KQED, the Bay Area’s NPR affiliate. She teaches writing at the University of San Francisco, and works with immigrant high school students as part of a San Francisco Arts Commission initiative bringing writers into public schools. She is working on a family memoir about her grandfather, a curandero from Colombia who it was said had the power to move clouds.

Franklin Leonard is a film producer, cultural commentator, professor, and entrepreneur. He is the founder and CEO of the Black List, the company that celebrates and supports great screenwriting and the writers who do it via film production, its annual survey of best unproduced screenplays, online marketplace, live staged script readings, screenwriter labs, and film culture publications. More than 400 scripts from the annual Black List survey have been produced as feature films earning 250 Academy Award nominations and 50 wins including four of the last ten Best Pictures and ten of the last twenty-two screenwriting Oscars. Franklin has worked in feature film development at Universal Pictures and the production companies of Will Smith, Sydney Pollack and Anthony Minghella, and Leonardo DiCaprio. He has been a juror at the Sundance, Toronto, and Guanajuato Film Festivals and for the PEN Center Literary Awards. He was also a delegate and speaker at the White House’s 2015 Global Entrepreneurship Summit in Nairobi, Kenya. He’s been one of Hollywood Reporter’s 35 Under 35, Black Enterprise magazine’s “40 Emerging Leaders for Our Future,” The Root’s 100 Most Influential African-Americans, and Fast Company’s “100 Most Creative People in Business,” and was awarded the 2015 African-American Film Critics Association (AAFCA)’s Special Achievement Award for career excellence and the 2019 WGAE (Writers Guild of America, East) Evelyn Burkey award for elevating the honor and dignity of screenwriters. He is an occasional commentator on the BBC and MSNBC on matters of culture, politics, and race, an associate professor at the American Film institute, a Trustee of PEN America, an advisor to Glitch, Inc., and a member of the Associates Branch of the Academy of Motion Pictures Arts and Sciences. His TED talk was viewed more than one million times in its first two months of release.

Susan Orlean is the author of eight books, including The Bullfighter Checks Her Makeup, My Kind of Place, Saturday Night, and Lazy Little Loafers. In 1999, she published The Orchid Thief, a narrative about orchid poachers in Florida, which was made into the Academy Award-winning film, Adaptation. Her book, Rin Tin Tin: The Life and the Legend, a New York Times Notable book, won the Ohioana Book Award and the Richard Wall Memorial Award.  Her most recent book, The Library Book, about the Los Angeles Public Library, is a New York Times best seller. It was published in 2018. Orlean has been a staff writer for the New Yorker since 1992, covering such subjects as taxidermy, fashion, umbrellas, origami, dogs, and chickens. She was a Nieman Fellow at Harvard University in 2003. In 2012 she received an honorary Doctor of Humane Letters from the University of Michigan. In 2014, she was awarded a Guggenheim Fellowship in Creative Arts/Nonfiction. She lives in Los Angeles with her husband and son.

Michelle Tea‘s most recent book, Against Memoir: Complaints, Confessions and Criticisms, is longlisted for a PEN/Diamonstein-Speilvogel Award for the Art of the Essay. Her other work include the cult classic Valencia, the illustrated Rent Girl, and the collection How to Grow Up. She curates the Amethyst Edition imprint at The Feminist Press and is the creator of Drag Queen Story Hour.