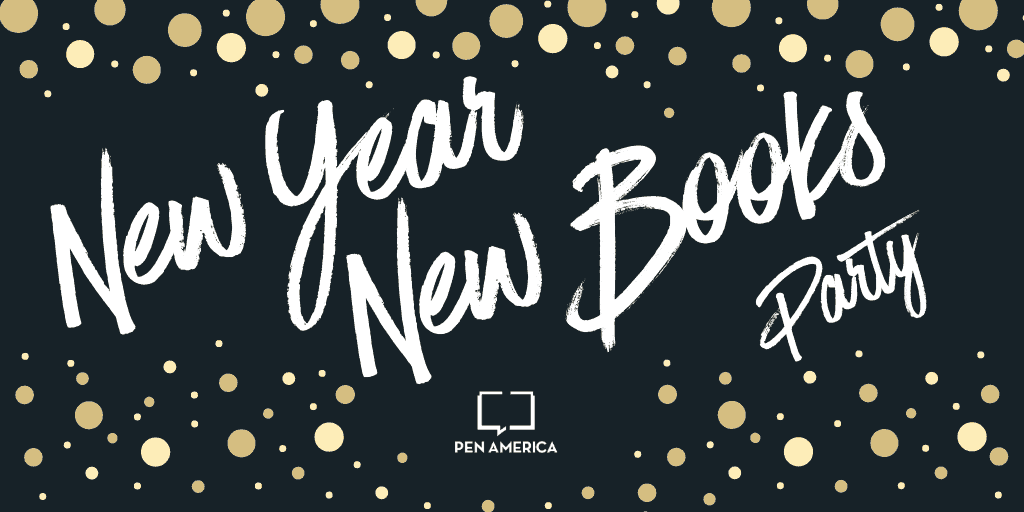 Ring in the new year and the new decade among PEN America Members and supporters at our annual New Year New Books party in New York City!

Also on hand will be a very special guest – Ukrainian writer and filmmaker Oleg Sentsov, the 2017 PEN/Barbey Freedom to Write Award winner just recently freed from a 20-year sentence at a Siberian penal colony after a worldwide campaign by PEN America and allies. Oleg will share what it meant as an imprisoned writer to know your voices were raised against injustice and that he was not forgotten.

Check out highlights of the event here >> 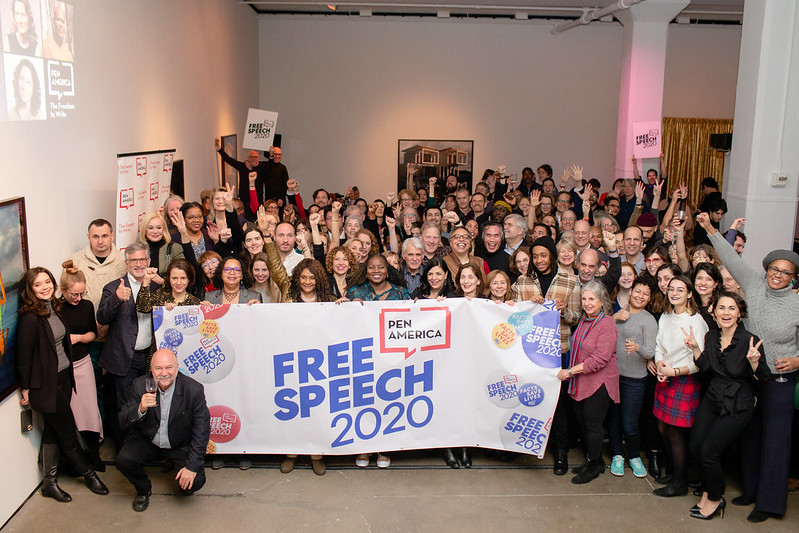 Check out highlights from our photo booth here >> 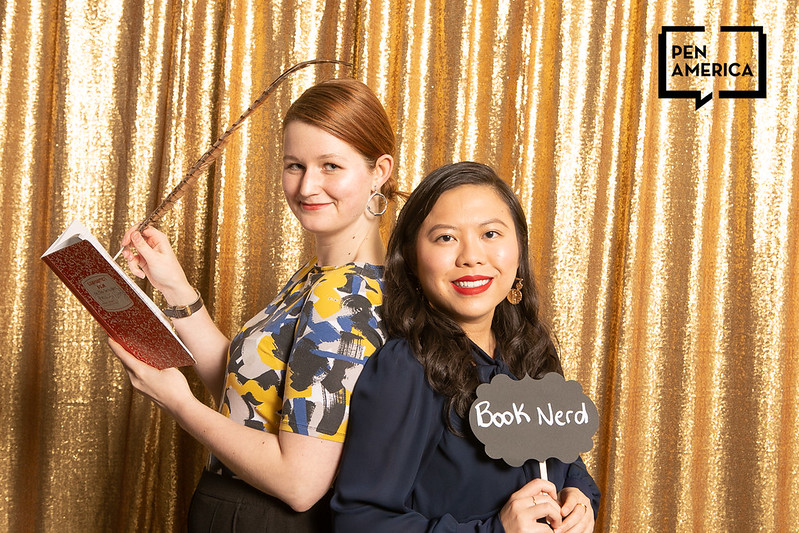 Nana Kwame Adjei-Brenyah is The New York Times-bestselling author of Friday Black. Originally from Spring Valley, New York, he graduated from SUNY Albany and went on to receive his MFA from Syracuse University. His work has appeared or is forthcoming from numerous publications, including The New York Times Book Review, Esquire, Literary Hub, the Paris Review, Guernica, and Longreads. He was selected by Colson Whitehead as one of the National Book Foundation’s “5 Under 35” honorees, is the winner of the PEN/Jean Stein Book Award, and is also a finalist for the National Book Critics Circle’s John Leonard Award for Best First Book and the Aspen Words Literary Prize.

Jennifer Finney Boylan, author of 15 books, is the inaugural Anna Quindlen Writer in Residence at Barnard College of Columbia University. Her column “Men & Women” appears on the op/ed page of The New York Times on alternate Wednesdays. She serves on the Board of Trustees of PEN America. From 2011 to 2018, she served on the Board of Directors of GLAAD and was co-chair of GLAAD’s board of directors from 2013 to 2017. She was a member of the Board of Trustees of the Kinsey Institute for Research on Sex, Gender, and Reproduction, and also provided counsel for the TV series Transparent and I Am Cait. Her most recent book is the novel Long Black Veil, published by Penguin Random House in April 2017. Two other current projects are Falcon Quinn and the Bullies of Greenblud, an anti-bullying YA project; and the anthology of women writing about home, This Is the Place. Her 2003 memoir, She’s Not There: a Life in Two Genders, was the first bestselling work by a transgender American. A novelist, memoirist, and short story writer, she is also a nationally known advocate for civil rights. Jenny has appeared on the Oprah Winfrey Show, Live with Larry King, the Today Show, the Barbara Walters Special, NPR’s Marketplace, and Talk of the Nation; she has also been the subject of documentaries on CBS News’ 48 Hours and The History Channel.

Jennifer Egan is a Pulitzer Prize-winning writer and the President of PEN America. Her most recent work, Manhattan Beach, won the 2018 Carnegie Medal for literary excellence and was recently selected as the One Book, One New York City-wide read. She is also the author of A Visit from the Goon Squad, which won the 2011 Pulitzer Prize, the National Book Critics Circle Award for Fiction, and the Los Angeles Times Book Prize. Other works include: The Invisible Circus, a novel that became a feature film starring Cameron Diaz in 2001; Look at Me, a finalist for the National Book Award in fiction in 2001; and The Keep. Her short stories have appeared in The New Yorker, Harper’s, Granta, McSweeney’s, The Best American Short Stories, and other magazines and collections. She is a recipient of a Guggenheim Fellowship, a National Endowment for the Arts Fellowship in Fiction, and a Dorothy and Lewis B. Cullman Fellowship at the New York Public Library. Her nonfiction articles appear frequently in The New York Times Magazine, and her 2002 cover story on homeless children received the Carroll Kowal Journalism Award. Her article “The Bipolar Kid” received a 2009 NAMI Outstanding Media Award for Science and Health Reporting from the National Alliance on Mental Illness. She was born in Chicago and raised in San Francisco. She joined the PEN America Board in 2012.

James Hannaham is a writer and visual artist. His novel Delicious Foods won the PEN/Faulkner Award, the Hurston/Wright Legacy Award, and the Morton Dauwen Zabel Award from the American Academy of Arts and Letters. His debut, God Says No, was honored by the American Library Association’s Stonewall Book Awards. He has published short stories in One Story, Fence, Story Quarterly, and BOMB. Hannaham has contributed to the Village Voice since 1992, was a staff writer at Salon.com, and his criticism, essays, and profiles have appeared in Spin, Details, Us, Out, Buzzfeed, The New York Times Magazine, 4Columns, and elsewhere. He also co-founded the performance group Elevator Repair Service, working with them from 1992–2002. Hannaham has exhibited text-based visual art at 490 Atlantic Gallery, James Cohan, Kimberley-Klark, and The Center for Emerging Visual Artists. He is a tenured professor in the Department of Writing at the Pratt Institute. He joined the PEN America Board in 2019.

Crystal Hana Kim’s debut novel, If You Leave Me, was named a best book of 2018 by The Washington Post, ALA Booklist, Literary Hub, Cosmopolitan, and others. It was also longlisted for the Center for Fiction Novel Prize. Kim was a 2017 PEN America Dau Short Story Prize winner and has received scholarships from the Bread Loaf Writers’ Conference, Hedgebrook, and Jentel, among others. Her work has been published in Elle Magazine, The Paris Review, The Washington Post, and elsewhere. She holds an MFA in Creative Writing from Columbia University and an MSEd from Hunter College. She is a Teach For America alum and has taught elementary school, high school, and collegiate writing. She is a contributing editor at Apogee Journal.

Morgan Jerkins is the Senior Editor at ZORA and a Visiting Assistant Professor at Columbia University’s School of the Arts. Her debut essay collection, This Will Be My Undoing: Living at the Intersection of Black, Female, and Feminist in (White) America (Harper Perennial 2018), was a New York Times bestseller and longlisted for the PEN/Diamonstein-Spielvogel Award for the Art of the Essay. Her second book, Wandering in Strange Lands: A Daughter of the Great Migration Reclaims Her Roots, is forthcoming in 2020 from Harper Books. Her other work has been featured in The New Yorker, The New York Times, Esquire, Rolling Stone, The Atlantic, The Guardian, and ELLE, among many others. Jerkins regularly teaches at Catapult and is the incoming Picador Professor at Leipzig University in Germany. She graduated with her Bachelor’s Degree in Comparative Literature from Princeton University and an MFA in Writing and Literature from the Bennington Writing Seminars.

Dinaw  Mengestu is an Ethiopian-American author of three novels, most recently All Our Names. His debut novel, The Beautiful Things That Heaven Bears, won the Guardian First Book Award and the Los Angeles Times Book Prize, and was a New York Times Notable Book of 2007. His novel How to Read the Air was the winner of the 2011 Ernest J. Gaines Award for Literary Excellence. He was a 2012 MacArthur Foundation Fellow and recipient of a “5 Under 35” award from the National Book Foundation. He was included on The New Yorker’s “20 Under 40” list in 2010. Mengestu is director of the Written Arts Program at Bard College. He has held the Lannan Chair of Poetics at Georgetown University and taught at Brooklyn College. He serves on the Advisory Board of Warscapes, an independent online magazine, and was a National Book Awards judge. He is also a journalist whose work includes reporting from conflict-affected regions of Africa and has appeared in such publications as Harper’s, Granta, Rolling Stone, The New Yorker, and The Wall Street Journal. He joined the PEN America Board in 2016.

Fatima Shaik is an American author and former daily journalist. Her next book is Economy Hall: A Radical Memoir (THNOC, Fall 2020), the true story of a free black family from the Haitian Revolution to the birth of jazz. Children’s books include Melitte, nominated as one of the Best Books for Young Adults by YALSA, 1998; The Jazz of Our Street, “a compact cultural history,” according to Kirkus; and On Mardi Gras Day, one of the Bank Street College of Education’s Best Holiday Books of 1999. Her 2015 adult collection What Went Missing and What Got Found showed “stories are the true record of history” (Story Circle Book Reviews). The Mayor of New Orleans: Just Talking Jazz is “a critique of race, art, and politics that stings as much, if not more so, today than it did three decades ago,” (Louisiana Cultural Vistas, 2017). Publications include the anthologies African-American Literature, Streetlights: Illuminating Tales of the Urban Black Experience, and Breaking Ice: Contemporary African-American Fiction; journals Killens Review of Arts and Letters, Callaloo, and the Southern Review; and nonfiction, In These Times, The Root, Essence, and The New York Times. She received LEH and NEH fellowships, and a Kittredge Fund grant. She was a New Orleans Times-Picayune reporter, assistant editor of McGraw-Hill World News, and served on board of The Writers Room. She was an assistant professor at Saint Peter’s University. Since 2006, she has coordinated the PEN CYAB visiting authors program to Martin Luther King Jr. School in New Orleans.