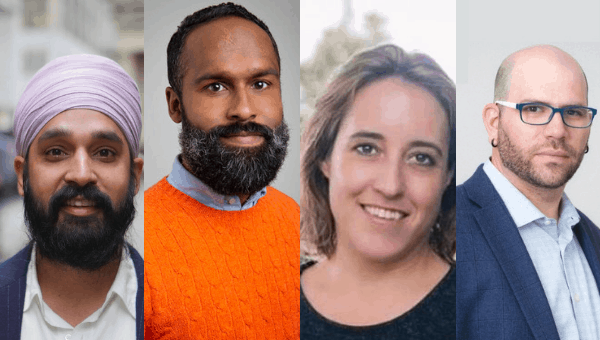 Negotiating Difficult Conversations: When Free Speech is in the Job Description is a panel discussion that brings together people in different fields—higher education, advocacy, and law—with experience managing difficult situations in which speech can be unpredictable or volatile.

The aim of the panel is to push the national debate around “free speech” in new, productive dimensions. How can we move away from more abstract conversations about free speech, to focus instead on the practical work of engaging across lines of difference? By hearing from people who do it in their daily work, we hope to provide practical ideas about how people can hone these skills for their own professional futures.

Some of the questions we will consider in this discussion include: What strategies can a person employ to negotiate with someone they otherwise dislike? How can such conversations be productive and useful? What are some of the common mistakes people make when approaching conversations across ideological differences, and how exactly are they counterproductive? How does “free speech” impact your professional work? And, what does your personal experience tell you about the value of free speech as a civil liberty?

Jonathan Friedman is the project director for campus free speech at PEN America. He oversees PEN America’s advocacy, analysis, and outreach in the national debate around free speech and inclusion at colleges and universities. Prior to joining PEN America, Friedman was an adjunct professor at New York University and Columbia University, teaching undergraduate and graduate courses in comparative and international education, higher education, and social theory. His research on American and international higher education looks at such topics as university administration, organizational cultures, nationalism, and cross-cultural understanding. He also previously managed the Multinational Institute of American Studies, an exchange program funded by the U.S. Department of State for international scholars to learn about American society and culture. Friedman holds a Ph.D. in International Education from New York University, and has received awards for his teaching, research, and leadership.

Emerson Sykes is a staff attorney with the ACLU Speech, Privacy, and Technology Project where he focuses on First Amendment free speech protections. Prior to joining the ACLU in 2018, he was a legal advisor for Africa at the International Center for Not-for-Profit Law (ICNL) where he provided technical legal assistance and training to African civil society leaders, government officials, law students, and other stakeholders to improve the legal framework protecting the freedom of association, assembly, and expression. Emerson previously served as assistant general counsel to the New York City Council and senior policy fellow in the office of a member of Parliament in Ghana. Emerson holds a J.D. from the New York University School of Law, where he was a Root-Tilden-Kern scholar for public interest law, a Master of Public Affairs degree from the Woodrow Wilson School at Princeton, and B.A. from Stanford.

Dr. Simran Jeet Singh is an educator, writer, activist, and scholar who speaks regularly on issues of diversity, inclusion, religion, race, equity, and hate violence. He is currently based at New York University‘s Center for Religion & Media and at the Sikh Coalition, a national civil rights organization. Simran holds graduate degrees from Harvard University and Columbia University, and he’s also a columnist for the Religion News Service.

Dr. Merav Ben-Nun received her PhD in International Education from New York University, and her BA in Political Science and Sociology, from the Hebrew University in Jerusalem. Upon returning to Israel at the completion of her studies, Merav founded the Hand in Hand bilingual integrated Jewish-Arab school in Haifa, Israel, and built a shared adult community of Haifa residents, Jews and Arabs. She lectured at Oranim Academic College and other colleges in Israel, on the historical and contemporary aspects of the Israeli-Palestinian conflict. Merav is also a social and political activist, and was involved in a number of initiatives focused on strengthening Israeli democracy, social justice and building shared Jewish-Arab political cooperation.