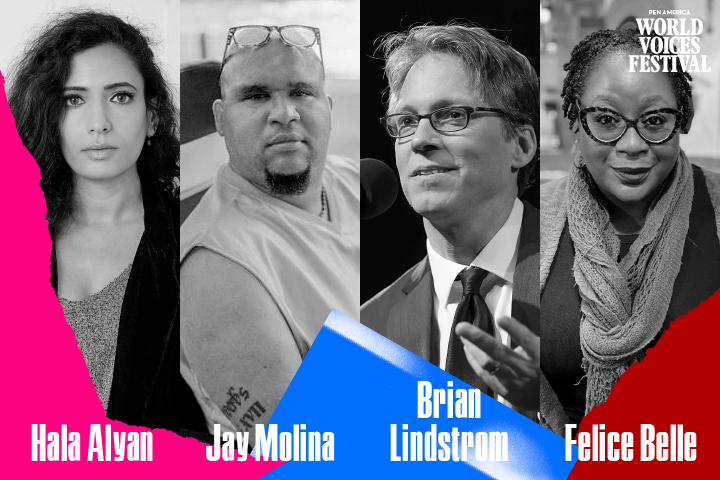 Filmmakers Brian Lindstrom and Jay Molina join poet Hala Alyan to talk about the intersection between poetry, film, and social justice. What happens when three artists—who have grown into their art as people with differently abled bodies, who hail from different ZIP codes, and who would never have had a chance to meet or work together—are brought into proximity through storytelling? Moderated by Narrative 4’s (N4) Felice Belle, this panel explores the role of the artist in 2021, the need for new narratives, and ideas for transforming our anger and empathy into action.

N4’s immersive field exchange program brings together communities that do not ordinarily intersect, and this year’s program partnered high school students from the Bronx, NY and Eastern Kentucky with the OPEN DOORS Reality Poets who are showcased in the forthcoming documentary Fire Through Dry Grass.

This digital event will start at 5pm ET / 2pm PT. If you have any questions, please visit our FAQs.

Presented in collaboration with Narrative 4 and OPEN DOORS.

Felice Belle consumes and creates stories to make sense of the world and her place in it. As a poet and playwright, she has performed at the Apollo Theater, Joe’s Pub at The Public Theater, TEDWomen, and TEDCity2.0. Her writing has been published in several journals and anthologies, including Oral Tradition, Bum Rush the Page, and UnCommon Bonds: Women Reflect on Race and Friendship. Playwriting credits include Other Women, Game On!, and It Is Reasonable to Expect. She is a lecturer in the low-residency MFA program at St. Francis College in Brooklyn and marketing director for the global nonprofit Narrative 4.

Hala Alyan is the author of the novel Salt Houses, winner of the Dayton Literary Peace Prize and the Arab American Book Award and a finalist for the Chautauqua Prize, as well as the forthcoming novel The Arsonists’ City, and four award-winning collections of poetry, most recently The Twenty-Ninth Year. Her work has been published by The New Yorker, the Academy of American Poets, Literary Hub, The New York Times Book Review, and Guernica. She lives with her husband in Brooklyn, where she works as a clinical psychologist.

Born in the Dominican Republic, where he played Minor League Baseball, Andres “Jay” Molina immigrated to NYC in the ’90s. He worked as a truck driver until becoming involved with the drug trade. After he served time in prison, his plans for a new life were thwarted by a rare lung condition that took his ability to walk. Molina moved into a nursing facility and began writing and performing with other younger residents as the OPEN DOORS Reality Poets. Molina is co-directing the documentary Fire Through Dry Grass about the artist collective’s survival and activism during the pandemic.

Brian Lindstrom’s award-winning films attempt to reduce stigma and reveal the humanity of people living on the margins. His most recent film, The New York Times’s op-doc We Are Forbidden (2019), was about the impact of menstrual stigma on women and girls in Nepal, which he made with his wife, Cheryl Strayed. Alien Boy: The Life and Death of James Chasse (2013) explores police accountability after members of the Portland Police Bureau brutally killed a nonviolent man with schizophrenia. Finding Normal (2007) follows longtime heroin- and crack-addicted people trying to rebuild their lives with the help of recovery mentors. Mothering Inside (2015) focuses on the Family Preservation Project’s innovative work uniting incarcerated mothers at Coffee Creek Correctional Facility with their children. Like a Shield (2018) examines the trauma of arrest and incarceration from the point of view of children and mothers separated by the justice system.

Narrative 4 (N4) exists to break down barriers and shatter stereotypes by using the power of stories, art, and education to equip young people to become powerful forces of change. They are a global organization driven by artists, shaped by educators, and led by students. Using their core methodology, the story exchange, they help students understand that their voices, stories, actions, and lives matter.

OPEN DOORS is a network of artists, activists, and advocates. They support the creativity and leadership of Black and Brown people who use wheelchairs. At the center of their network are the Reality Poets—a group of current and former residents of a long-term care facility in New York City. Led by the Reality Poets, OPEN DOORS has become a hub for creative collaborations that break down barriers, nurture empathy, and inspire action for safer and more just communities.

Dark patterns are design tactics used by websites and apps to trick or coerce you into doing things you probably would not do otherwise. Learn more about how together we can make hoodwinking the public less appealing to companies: https://bit.ly/3fDKkPZ.

PEN America is looking for ambitious and talented high school and college students for the return of our Free Speech Advocacy Institute! This innovative two-week program offers a crash-course on major threats to free speech. Apply by Friday 6/18! http://bit.ly/3tBV6LN

Huge congratulations to @MitchSJackson, a past PEN America Writing for Justice Fellow, on his Pulitzer for this extraordinary essay on Ahmaud Arbery. https://www.runnersworld.com/runners-stories/a32883923/ahmaud-arbery-death-running-and-racism/