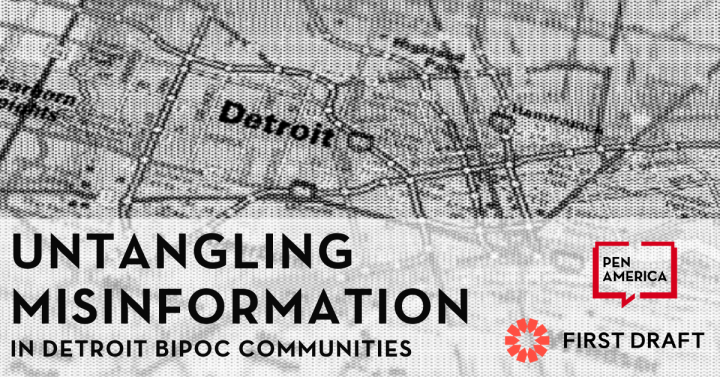 Communities of color have been hit hard by the pandemic. They’re at the center of a nationwide reckoning about racial injustice. And they are also particularly vulnerable to the spread of online mis- and disinformation. Join First Draft, PEN America, and local news and government leaders in a virtual conversation about what misinformation in BIPOC communities looks like, its impact, the role of the press, and the solutions that local journalists are coming up with to combat it.

Research shows that Americans trust local news sources most. But local newsrooms have been shrinking as advertising dollars have gone to social media platforms. Meanwhile, those very newsrooms often lack diverse staff and connections to communities of color. When communities cannot find the information that they’re looking for, this creates a perfect storm for misinformation to flourish online via Facebook, Twitter, Instagram, TikTok, as well as via private messaging services such as WhatsApp and Messenger. While these mediums can fill some information voids without the benefit of fact-checking or context, they can also cause confusion and mistrust of local news.

Community leaders, activists, journalists—everyone is invited to this wide-ranging discussion on how we can help the public gain access to the information they need. This webinar is free and open to the public.

Orlando Bailey is a lifelong Detroiter. His professional career launched at Eastside Community Network where he most recently served as Chief Development Officer. Orlando is co-host and producer of the podcast, Authentically Detroit. Orlando is also the host of Urban Consulate; a space where people gather to have critical conversations about cities. He has been a regular contributor to 105.9 KISS/FM on the “Mildred Gaddis Show” with his own segment entitled “The Millennial Moment.”

Raquel Castañeda-López, a lifelong Detroiter, made history in November 2013 by becoming the first Latina elected to the Detroit City Council. A social worker by trade, Castañeda-López has over ten years of experience in the non-profit sector and is committed to working for social justice to improve the quality of life for all Detroiters. She developed a strong resident service program, through grassroots organizing and a mobile office, helping residents and businesses cut through the ‘red tape’ in order to access services and resources. She is working to ensure Detroiters have a voice on City Council championing policies that promote access, inclusivity and equity.

Sarah started her career in civil rights law in New York, but is much happier as a journalist than she ever was as a lawyer. Before founding Outlier Media, she worked as a senior producer and reporter at Michigan Radio, the statewide NPR affiliate. In that role, she covered issues important to low-income families, child welfare and disability. Her work has been featured on NPR, Marketplace, The Center for Investigative Reporting, Bridge Magazine, The Detroit News, and The New York Times. Sarah believes journalism is a service and should be responsive to the needs of all people. She developed Outlier’s model after years of trying to figure out how journalists could do a better job filling information gaps and increasing accountability to low-income news consumers. She launched Outlier in 2016, during her year as John S. Knight (JSK) Fellow at Stanford University. She lives in northwest Detroit.

Nina Misuraca Ignaczak is an award-winning Detroit-based freelance journalist and documentary filmmaker. She writes and produces stories about the environment, place, and identity. Her recent work has been published by the Huffington Post, Detroit Free Press, Crains Detroit Business, Business Insider, Belt Magazine, Curbed, Detour Detroit, and Model D. She is the founder, publisher, and editor of Planet Detroit, a digital media startup that tells Detroit’s environmental stories while building a community of engaged readers who are informed and empowered to act personally and publicly.

Nargis Rahman is a Bangladeshi-American Muslim writer and a mother of three. She is passionate about community journalism in the Greater Detroit area and about giving American Muslims and people of color a voice in today’s media. A former journalism fellow for Feet in 2 Worlds/WDET 101.9 FM, her work has appeared in Michigan Radio, Haute Hijab, Eater, Detroiter Magazine, The Muslim Observer and others.

Serena Maria Daniels is a freelance journalist and writes about issues related to culture, identity, race, and immigration through the lens of food. She is the founder and editor of Tostada Magazine, an independent food & culture journalism platform in Detroit. As a freelancer, she’s covered the Flint water crisis, housing and development inequality, Detroit’s bankruptcy, criminal justice, and local politics for Reuters, HuffPost, Next City, and others. In 2014, Serena reported on the legacy of NAFTA in Mexico’s automotive industry through a Ford fellowship with the International Center for Journalists. She is a former staff writer at The Detroit News, Chicago Tribune, and The Orange County Register.

Nora Benavidez is the director of U.S. Free Expression Programs, where she guides PEN America’s national advocacy agenda on First Amendment and free expression issues. Benavidez is a lawyer by training and, prior to joining PEN America, she worked in private practice as a civil and human rights litigator in Atlanta, Georgia. She has represented victims of unconstitutional police practices, First Amendment infringements, discrimination in public schools, and voting rights violations. In addition to her work as a litigator, Benavidez partnered with regional grassroots organizations and state and local legislative entities, advising and testifying on community-centered reforms in public safety, government transparency, criminal justice, and free speech.