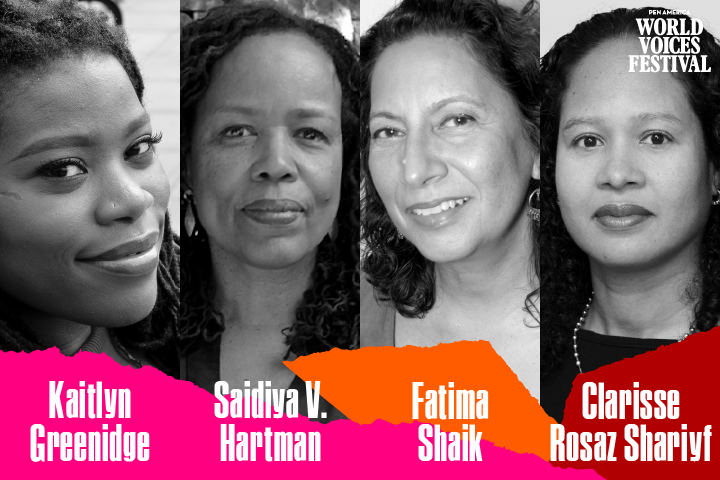 In their stirring recent works, Fatima Shaik, Kaitlyn Greenidge, and Saidiya V. Hartman recover lost and untold stories from the early history of Black freedom in America, starting with the Reconstruction era. In Economy Hall, Shaik gives vivid new life to 19th century ledgers her father rescued from the trash of an about-to-be-leveled building over half a century ago—approximately 3,000 handwritten pages revealing the goings-on of the progressive society the ledgers’ writer, a Haitian-American man named Ludger Boguille, co-founded in 1836. Applying “inviting” storytelling, in-depth archival research, and a “lyrical and mysterious and always captivating” depiction of her hometown New Orleans, her “monumental” (The New York Times) nonfiction work evocatively reconstructs one hundred years of Black activism surrounding the Tremé-based mutual aid society. Award-winning author and scholar Saidiya V. Hartman was awarded the 2021 PEN/John Kenneth Galbraith Award for Nonfiction in honor of her most recent book, Wayward Lives, Beautiful Experiments. The New York Times critic Parul Seghal calls Hartman “a sleuth of the archive,” and labels her book “an exhilarating work of history about daring adventures in love” undertaken by Black women from Reconstruction through to the Harlem Renaissance.

Whiting Award-winner Kaitlyn Greenidge joins these nonfiction writers with her novel, Libertie, which follows a freeborn Black girl’s journey from Reconstruction-era Brooklyn to Haiti and her mother, who becomes one of the first Black female doctors in U.S. history. The “sheer force of Greenidge’s vision” propels a novel that’s a “feat of monumental imagination” (The New York Times), a work that’s “psychologically astute, with an eye for nuance and a deep awareness of the ways that history influences the present” (NPR). Clarisse Rosaz Shariyf, senior director of literary programs at PEN America, will moderate their conversation about mining historical archives and melding research with personal experience—and how this process empowered their respective imaginations and creative processes as they told stories of Black excellence and ingenuity.

Fatima Shaik read 3,000 pages of handwritten French journals stored in her family’s cabinets to write Economy Hall: The Hidden History of a Free Black Brotherhood, the story of a New Orleans community from the Haitian Revolution to the creation of jazz. The New York Times noted Economy Hall, her first nonfiction book, “is so inviting that the true depth of its scholarship is revealed only in its bibliography, which lists dozens of archival and other sources. Shaik’s monumental book is. . . lyrical and mysterious and always captivating.” One of Library Journal’s Titles to Watch in 2021, Economy Hall received a Kirkus star and its recommendation as one of 4 New Books to Read for Black History Month (February 2021). Shaik is a former journalist, tenured assistant professor, and ex-officio PEN Trustee.

Kaitlyn Greenidge’s debut novel We Love You, Charlie Freeman was one of The New York Times Critics’ Top 10 Books of 2016 and a finalist for The Center for Fiction First Novel Prize. She is the features director at Harper’s Bazaar and a contributing writer for The New York Times, and her writing has also appeared in Vogue, Glamour, The Wall Street Journal, and elsewhere. She is the recipient of fellowships from the Whiting Foundation, the National Endowment for the Arts, and the Radcliffe Institute for Advanced Study. Libertie is her second novel.

Saidiya V. Hartman is the author of Scenes of Subjection: Terror, Slavery, and Self-Making in Nineteenth-Century America (Oxford University Press, 1997); Lose Your Mother: A Journey Along the Atlantic Slave Route (Farrar, Straus and Giroux, 2007) and Wayward Lives, Beautiful Experiments (W. W. Norton & Company, 2019). She is currently at work on a new book project, N Folio: An Essay on Narrative and the Archive. She has published articles on slavery, history and the archive, and Black women’s lives, including “The Terrible Beauty of the Slum,” “Venus in Two Acts,” and “The Belly of the World.” She was awarded a MacArthur Fellowship in 2019. She was a Guggenheim Fellow in 2018-2019, and has been a Cullman Center Fellow at The New York Public Library, a Fulbright Scholar in Ghana, a Whitney J. Oates Fellow at Princeton University, and a Critical Inquiry Visiting Professor at The University of Chicago. She received her BA from Wesleyan University and her Ph.D. from Yale University. She has taught at the University of California, Berkeley and is a professor of English and Comparative Literature and Gender Studies at Columbia University. She is the former director of the Institute for Research on Gender and Sexuality.

Clarisse Rosaz Shariyf is PEN America’s senior director of literary programs. She oversees curation, production, audience building, and strategy for a range of programs and initiatives honoring literary excellence, featuring American and international authors and artists. Formerly, she was the manager of public programs at the Schomburg Center for Research in Black Culture, The New York Public Library, and produced a year-round schedule of panel discussions, performances, film screening, and symposia spanning the history and culture of the global Black experience.