Mai Khoi and the Dissidents 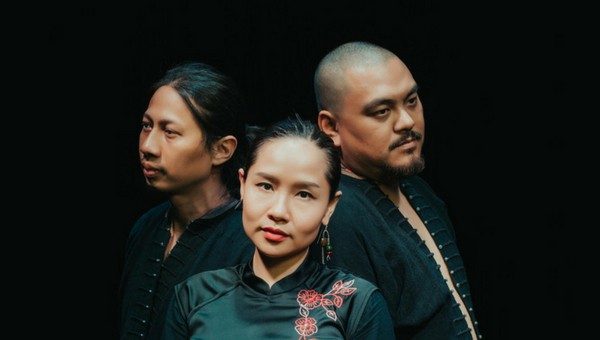 NationalSawdust+, in partnership with Artists at Risk Connection (ARC) and PEN America, presents an evening of international music, literature, and conversation with Mai Khoi and the Dissidents. Khoi—often dubbed the Lady Gaga of Vietnam—was persecuted for her open criticism of the state, especially as she evolved from her pop star roots into an experimental folk artist chanting lyrics infused with themes of resistance and protest. Joined by fellow activist musicians Quyen Thien Dac and Nguyen Duc Minh, Mai Khoi and the Dissidents are a luminary voice captivating audiences internationally.

This is Mai Khoi and the Dissidents’ first performance in the States. The performance will be followed by a reading and discussion with poet Paul Tran. An audience Q&A session will follow.

This program is presented in partnership with the Artists at Risk Connection (ARC), an initiative of PEN America dedicated to assisting imperiled artists and fortifying the field of organizations that support them.

This event is supported by The Andy Warhol Foundation for the Visual Arts and Artistic Freedom Initiative.

Mai Khoi is a pop star, singer, and political dissident from Vietnam. In 2010, she won the Vietnamese Song and Album of the Year Award, Vietnam’s most prestigious award for songwriting. She is committed to bringing about meaningful political change in her home country: In 2016, she became the first Vietnamese celebrity in history to nominate herself for candidacy to the country’s National Assembly on a pro-democracy platform. Despite her unfair disqualification from the election, Mai Khoi’s actions ignited meaningful and much-needed political debate in Vietnam. She subsequently participated in a private meeting with U.S. President Barack Obama to discuss the state of Vietnamese free speech. As a result of her political activities, she has been banned from performing in Vietnam. Most recently, she protested Trump’s visit to Vietnam and continues to advocate for political change despite facing threats and intimidation. She is also involved in Seaphony, a project that aims to form the first pan-Southeast Asian orchestra comprised of ethnic minority musicians.

Nguyen Duc Minh is a versatile multi-instrumentalist proficient in mouth harps, bamboo flutes, scaled bamboo drums, the double reed, the trumpet, the urn drum, the string drum, and many percussive instruments. Minh is known for his propensity to weave hypnotic riffs around evolving melodies, articulating a diverse range of complex emotions from ecstatic joys to abject dejection. Minh has previously toured the United States as part of a competitive U.S. State Department awarded tour.

Quyen Thien Dac has been described as Vietnam’s only jazz musician. Dac learned saxophone from his father, Quyen Van Minh, who set up the first jazz club in Hanoi after the war. He graduated from Berklee College of Music in Boston and completed a Masters in Jazz at The University of Sweden. Dac forges an original and complex sound, bringing the timbre of traditional Vietnamese music to jazz using the baritone, soprano, and alto saxophones.

Paul Tran is a 2018 “Discovery”/Boston Review Poetry Prize winner. They live in Missouri, where they are poetry editor at The Offing and Chancellor’s Graduate Fellow in The Writing Program at Washington University in Saint Louis. Their work appears in The New Yorker, Poetry Magazine, and elsewhere, including the anthology Inheriting The War (W.W. Norton) and movie Love Beats Rhymes (Lionsgate). Paul is the first Asian American since 1993 to win the Nuyorican Poets Cafe Grand Slam, placing Top 10 at the Individual World Poetry Slam and Top 2 at the National Poetry Slam.