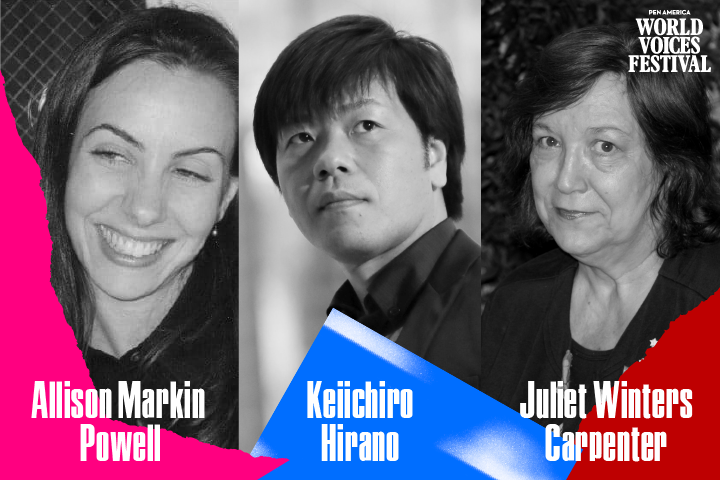 A classical guitarist meets a frontline journalist; they connect over a torrent of cultural and philosophical references and musings—and everything they reveal about one another. They then spend the ensuing years of their lives striving, and consistently failing, to reconnect.

At the End of the Matinee, the newest work from bestselling novelist Keiichiro Hirano, one of the youngest writers to ever win the prestigious Akutagawa Prize, continues his exploration of the power of relationships. Hirano will present a short, powerful, and inspiring talk on video about the importance and resilience of love in bridging cultural divides, styled after his viral TED Talk, “Love Others to Love Yourself,” which has garnered nearly 112,000 views on YouTube. Following his talk, the author will be joined by translator Juliet Winters Carpenter to discuss their shared journey to bring this sweeping love story to English readers. The conversation will be moderated by Allison Markin Powell, award-winning translator and member of PEN America’s Translation Committee.

This program is made possible in part by a grant from the
City of Los Angeles Department of Cultural Affairs.

Keiichiro Hirano is an award-winning and bestselling novelist whose debut novel, The Eclipse, won the prestigious Akutagawa Prize in 1998, when he was a 23-year-old university student. A cultural envoy to Paris appointed by Japan’s Agency for Cultural Affairs, he has given lectures throughout Europe. Widely read in France, China, Korea, Taiwan, Italy, and Egypt, Hirano is also the author of A Man and At the End of the Matinee, a runaway bestseller in Japan. Hirano’s short fiction has appeared in The Columbia Anthology of Modern Japanese Literature and The Transparent Labyrinth.

Juliet Winters Carpenter, born in Ann Arbor, MI, is a professor emerita of Doshisha Women’s College. Her first translated novel, Kobo Abe’s Secret Rendezvous, received the 1980 Japan-U.S. Friendship Commission Prize for the Translation of Japanese Literature. In 2014, her translation of Minae Mizumura’s A True Novel received the same award. Besides Keiichiro Hirano’s At the End of the Matinee, her recent translations include Mizumura’s An I-Novel; Tōru Haga’s Pax Tokugawana: The Cultural Flowering of Japan, 1603–1853; and Shion Miura’s The Great Passage. After 45 years in Japan, she now lives on Whidbey Island in Washington.

Allison Markin Powell has been awarded grants from English PEN and the National Endowment for the Arts, and the 2020 PEN Translation Prize for The Ten Loves of Nishino by Hiromi Kawakami. Her translations include works by Osamu Dazai, Fuminori Nakamura, and Kanako Nishi. As part of the collective Strong Women, Soft Power, she is curating the Japan Foundation, New York author/translator Literary Series; with Esther Allen, she co-curated the 2020 online conference Translating the Future; she served as co-chair of the PEN America Translation Committee and currently represents the committee on PEN America’s Board of Trustees.

The Japan Foundation, Los Angeles (JFLA) promotes international awareness and mutual understanding between Japan and the United States through cultural exchange. We administer a wide range of programs and grants aimed at introducing Japanese arts and culture; supporting Japanese studies and language education; and promoting publications and translations related to Japan.

We are a nonprofit organization, funded by an endowment from the Japanese government, annual government subsidies, as well as private sector donations. In addition to our Tokyo headquarters, the Japan Foundation has 25 offices in 24 countries, including our Los Angeles and New York office, as well as two Japanese-language institutes in Japan, and a Kyoto office.