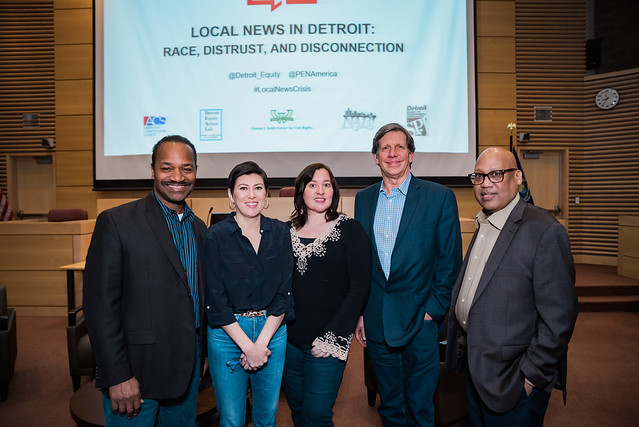 Local news is in a state of crisis. For over a decade, there has been a steady succession of local outlets closing down, reporters being laid off, production schedules cut, and resources tightened. As a result, thousands of communities across the country have less access to critical information on governance, elections, education, health, and numerous issues specific to their cities, towns, and neighborhoods. This crisis both exacerbates and is exacerbated by systemic inequities in the U.S. media landscape. Many of the communities that have traditionally been underserved by local media are those most affected by its decline. Just 2 percent of newspaper publishers are black. And 77 percent of all newsroom employees are non-Hispanic white (compared with 65 percent of all U.S. workers), and 61 percent are men (compared with 53 percent of all U.S. workers).

Inspired by PEN America’s recent report on the state of local news in the United States, and a case study written by Martina Guzmán, join us on Tuesday, December 10th at 6:30 p.m. at the Damon J. Keith Center for Civil Rights for a conversation about the media ecosystem in Detroit and exploring the relationship between local news, community, and race.

The event is co-presented by ACS Michigan Lawyer Chapter, Detroit Chapter of NABJ, Damon J. Keith Center for Civil Rights, NABJ Detroit Chapter, and the Society of Professional Journalists Detroit Chapter. The evening will feature an opening keynote by Martina Guzmán, and will be followed by a conversation with local journalists representing various news outlets, including Sarah Alvarez from Outlier Media, Curt Guyette from the ACLU of Michigan, and president of the National Association of Black Journalists’ Detroit Chapter Vincent D. McCraw. The panel discussion will be moderated by Ken Coleman.

Parking information can be found here, though please be prepared to pay by credit card, for the following rates: Lot 32 is $9.50 and Structure 1 is $8.50.

Martina Guzmán is an award-winning reporter and nationally recognized journalist. In 2009, she was named Best Individual Reporter by the Associated Press of Michigan for her work at WDET, Detroit’s public radio station. In 2011, her multi-media series, The Detroit-Berlin Connection, was awarded best series by the Michigan Broadcasters Association and first place for Best Investigative series from the Associated Press of Michigan. She has produced and directed two documentaries. The film Milagros: Made In Mexico examines the economic, social, and political roles women in Mexico take on when the men of the house cross the border. In 2009, she directed her second feature documentary The Accidental Mummies of Guanajuato, which aired on PBS, tells the story of the largest collection of accidental mummies in the Americas.

Sarah Alvarez started her career in civil rights law in New York, but is much happier as a journalist than she ever was as a lawyer. Before founding Outlier Media, she worked as a senior producer and reporter at Michigan Radio, the statewide NPR affiliate. In that role, she covered issues important to low-income families, child welfare, and disability. Her work has been featured on NPR, Marketplace, The Center for Investigative Reporting, Bridge Magazine, The Detroit News, and The New York Times. She developed Outlier’s model after years of trying to figure out how journalists could do a better job filling information gaps and increasing accountability to low-income news consumers. She launched Outlier Media in 2016, during her year as John S. Knight (JSK) Fellow at Stanford University. She lives in northwest Detroit.

Curt Guyette serves as the editor at large of ACLU Michigan, where he writes about issues including emergency management and open government. Prior to joining the ACLU of Michigan, Curt worked as a print journalist for more than 30 years, the last 18 of which were spent at the Metro Times, an alternative newsweekly based in Detroit. While there, he covered a variety of topics, from political coverage to individual struggles against systemic abuse. Along with a deep-seated irreverence toward the powerful, his work has been shaped by compassion for the underdog, and a relentless desire to see justice—be it social, economic, or environmental—served. He is the recipient of numerous local, state, and national journalism awards. The State Bar of Michigan has honored him three times for his outstanding coverage of legal issues.

Vincent D. McCraw is a journalist with 40 years experience in print and digital media. He has covered news stories on municipal government, politics, civic and community affairs in the Detroit, Atlanta and Washington, D.C. media markets. During a 15 year career at The Washington Times, McCraw  covered D.C. politics, government and community affairs. He is currently the president of Detroit NABJ. As the chapter’s president, he is the public face of the organization that advocates for diversity and inclusion in newsrooms in Metro Detroit, and sponsors skills oriented programs for its members, students and emerging journalists. In 2018, he and a team of Detroit NABJ officers and members were instrumental in the planning and execution of the annual national convention of the National Association of Black Journalists in Detroit after a 26 year absence.

Ken Coleman does enterprise and series reporting for Michigan Advance.com that concentrates on Southeast Michigan, history and civil rights. He is a former Michigan Chronicle senior editor and served as the American Black Journal segment host on Detroit Public Television. He has written and published four books on black life in Detroit, including Soul on Air: Blacks Who Helped to Define Radio in Detroit and Forever Young: A Coleman Reader. Ken has served as a spokesperson for the Michigan Democratic Party, Detroit Public Schools, U.S. Sen. Gary Peters and U.S. Rep. Brenda Lawrence. He is a Historical Society of Michigan trustee and a Big Brothers Big Sisters of Metropolitan Detroit advisory board member.