For the first time in years, everyone’s favorite literary bar crawl will return to Brooklyn. In the words of the Village Voice, if you’ve “ever snuck a flask into the library” or “would rather jam to Virginia Woolf than a woofer,” Lit Crawl is the night for you.

On October 7, Lit Crawl Brooklyn will bring an evening of revelry, literary trivia, readings, and performances to Fort Greene, Brooklyn, as we celebrate the New York literary community.

Save the date and tell your friends—all events are free, and everyone is welcome.

Join us for an after-party immediately afterward, from 9-11pm, at Die Stammkneipe.

Stop by Greenlight Bookstore throughout Lit Crawl Brooklyn to chat with our volunteers, get personalized recommendations on where to Crawl next, and pick up a book or three!

Rhyme & Resist: The Revolution Set to Verse
Habana Outpost, 757 Fulton St
Poets and writers from across the African Diaspora share poems and stories of resistance and promoting diversity. This event is curated by La Pluma y La Tinta.

The Resistance Revival: A Restoration of Force
MoCADA (Museum of Contemporary African Diasporan Arts), 80 Hanson Pl
The Resistance Revival is a regular series of musical events founded by the Women’s March where we bring song to life in the spirit of collective joy and resistance. Music and protest songs have always been a hallmark of great civil rights movements. We aim to bring together, in community, a group of diverse artists to join in songs of resistance and protest with the foundation that joy is an act of resistance.

Worth a Thousand Words
Die Stammkneipe / Der Schwarze Koelner, 710 Fulton St
New Yorker cartoonist and comedian Emily Flake (Mama Tried) will interview a crew of bestselling European artists about their new graphic novels—all recently translated to English, representing diverse styles from Sci-fi to “Manfra” (French Manga) to coming-of-age rock ‘n’ roll nostalgia! Meet Zep (A Story of Men), Patricia Lyfoung (The Scarlet Rose), Alexis Sentenac (Siberia 56), and Karim Friha. But instead of a standard author interview line-up (we’re over it, right?) these artists will answer with LIVE drawings. Audience participation will be encouraged as we think of queries to get this draw-off started, so bring your questions and capacity for amazement!

Miss Manhattan on the Rocks
Thirst Wine Merchants, 11 Greene Ave
Three writers read non-fiction about the drinking world, from beer to cocktails and everything in between. With Jaime Joyce (Moonshine: A Cultural History of America’s Most Infamous Liquor), Michele Thomas (The Bed-Stuy Sommelier), and Harris Sockel (Medium, Catapult, MEL).

The Blue Flower Arts Improv Party
Greene Grape Annex, 753 Fulton St
Think Gong Show (though we won’t be gonging anyone!) meets AWP meets Charlie Rose meets the Carol Burnett Show. In other words, this is an opportunity to for writers to let their hair down and read a page or two from their work, tell some jokes, sing a song, juggle, rant about politics…. With Saïd Sayrafiezadeh, Deborah Landau, and more.

Poetry Prom
baba cool, 64b Lafayette Ave
This one’s for all the friends, femmes, and freaks who’ll use any excuse to dress up. An evening of poetry with a theme that’ll take you right back to high school! (Though the poetry will be better). Poetry Prom is the antidote to the overly serious, stuffy poetry readings you’re used to – it’s an evening of magical monarchs reading their work to a roomful of laughing, partying prom-goers. With Ruby Brunton, Sophia Giovanitti, Mary Boo Anderson, Janea Kelly, and Valerie Hsiung.

Lyrics, Lit & Liquor
Black Forest Brooklyn, 733 Fulton St
A line up of literary readings hosted by Amanda Miller. Amanda will open the event as a comedy character and read trivia questions as herself between readings, tossing candy into the hands of audience members who answer correctly. There will also be live music.

Nerd Jeopardy
Die Stammkneipe / Der Schwarze Koelner, 710 Fulton St
Just like the game show! Except all the clues concern books, everyone’s tipsy, the audience heckles, and the only prize is the respect of one’s peers. With your host Ryan Chapman, special guest Emily Skillings and prizes from BOMB and Electric Literature.

Food 4 Thot: Reads
Thirst Wine Merchants, 11 Greene Ave
Food 4 Thot is a roundtable podcast wherein a multi-racial mix of queer writers talk about sex, identity, culture, what they like to read… and who they like to read. It’s like NPR on poppers. Food 4 Thot usually focuses on the writings of others, but for Lit Crawl Brooklyn the hosts and guests will entertain the crowd with spirited readings from their own work.

Mad Libs: Joyland’s Regional Edition
Habana Outpost, 757 Fulton St
Joyland‘s event will be a nod to the workbook game Mad Libs, and will give participants a chance to test their regional literary knowledge! In keeping with Joyland’s theme, there will be seven rounds, each based on one of Joyland’s verticals: New York, PNW, Canada, The South, The Midwest, Los Angeles, and San Francisco. Each round will use passages from pieces of literature written about a place in that given region, omitting words for participants to fill in. These passages will be gleaned from books that are fairly well-known, in an effort to not stump people too much!

A Most Exquisite Corpse
Greene Grape Annex, 753 Fulton St
Join four writers, who, along with their translators, will stitch together an Exquisite Corpse in multiple languages. Here’s how the game works: One person writes the first page of a story. We send the final line of that page to the next writer, who continues the story, and so on. Brought to you by SLICE Literary and Words Without Borders, with Eric M.B. Becker, Elizabeth Bryer, Georgi Gospodinov, Angela Rodel, Claudia Salazar Jiménez, Lucrecia Zappi, and Na Zhong. Hosted by SLICE Literary’s Randy Brown Winston, and Words Without Borders’ Jessie Chaffee.

Highlights from Lit Crawl NYC in May 2017 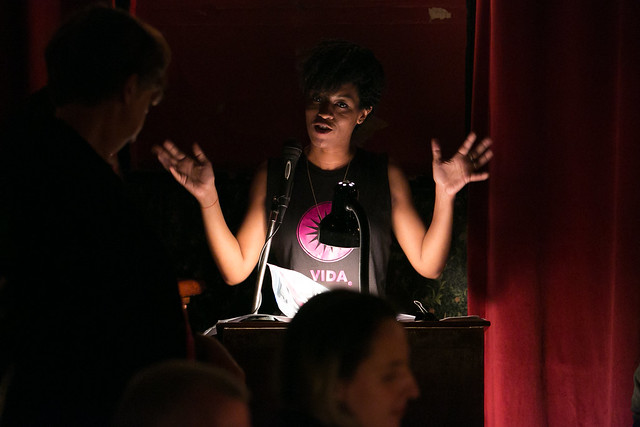 Last year, we asked Grammy Award-winning writer
@lynellgeorge, to share three reading recommendations from Octavia Butler’s oeuvre, along with an excerpt from her own book on Butler’s life. Check out Lynell's recommendations here: https://bit.ly/2AWxADO. #BlackHistoryMonth