Life and Death in a Carceral State 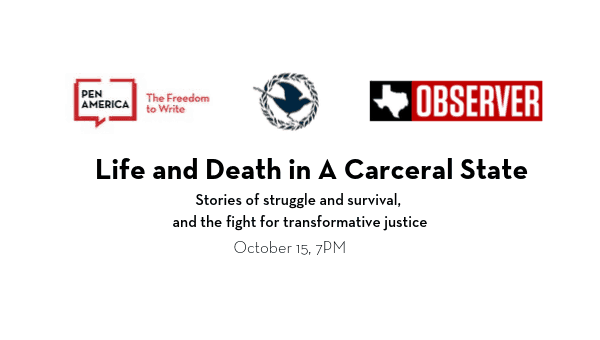 What is the real impact of the U.S. criminal justice system? Join PEN America, The Texas Observer, the Texas After Violence Project, and the Judith Filler Foundation for an evening of storytelling from folks who’ve experienced it. The event will feature readings of excerpted work by PEN America’s Writing For Justice Fellow Thomas Bartlett Whitaker, performed by his mentor, Maurice Chammah.

The event is free and open to the public.

Thomas Bartlett Whitaker, a former PEN America Writing for Justice Fellow, is working on Dividing by Zero, a series of long-form articles that describe his time living on the Deathwatch section of Texas’s death row, his successful clemency commutation by the governor mere minutes before his death, and the administrative limbo of his present life.

Maurice Chammah is a staff writer whose work has been published by The New Yorker, The Atlantic and The New York Times. He is currently at work on a book about the rise and fall of the death penalty, which won the 2019 J. Anthony Lukas Work-In-Progress Book Award. A former Fulbright fellow, he helps organize The Insider Prize, a contest for incarcerated writers sponsored by the magazine American Short Fiction. He lives in Austin, Texas.

Mignon Zezqueaux is the mother of three boys, Solomon, Joseph, and Ghabriel. In her interview with the Texas After Violence Project, Mignon spoke about the 2008 murder of her son Solomon and how his death affected her and her remaining children. She spoke particularly about its impact on Ghabriel, who was introduced into the juvenile justice system shortly after the loss of his brother, and is now incarcerated by the Texas Department of Criminal Justice. Mignon detailed their interactions with law enforcement, the court system, and the prison system, with a specific focus on mental health in the criminal justice system. She explained how those experiences inspired and inform her work as a criminal justice activist and member of the Texas Advocates for Justice.

Jorge Antonio Renaud is the son of a farmer of Louisiana descent, whose family moved to South Texas over 150 years ago, and a mother who waded the Rio Bravo at 15. Born in New Mexico but raised in Texas, Jorge is an Army veteran, has a MSSW from the University of Texas at Austin, and is the proud father of Catarina Amelia Renaud. Renaud is a writer, poet, and activist, who currently works for LatinoJustice as the Regional Director of Policy and Advocacy for the Southwest.

David Johnson is the Criminal Justice Organizer at Grassroots Leadership, actively supporting the efforts to promote the effective treatment of mental illness and substance use as an alternative to their criminalization. Since early 2017, David has been an active volunteer for Solstice Recovery Foundation – an Austin-based 501(c)(3) that supports addiction recovery – and holds the position of Recovery Ambassador with the organization. He also actively supports Oxford House, Austin Recovery, RecoveryATX, and NAMI.

Maggie Luna is a Criminal Justice and Public Policy Advocate.

And we just passed 2,000 listeners over at #thePENpod. To the next 2,000! Tune in for today's powerful episode with @PENamerica president @Egangoonsquad. https://anchor.fm/penamerica/episodes/Episode-15-Jennifer-Egan-on-Recovering-From-Coronavirus--Shaping-Opportunity-From-Cataclysm-ecf67p

We’re excited to share this list of new & soon-to-be-published books by authors due to appear at the 2020 @PENworldvoices Festival, canceled b/c of the pandemic. We know these stories will spark the conversations we had planned to present to you in May! https://bit.ly/3aMUOJe

A new report by @CommonsForeign argues that China should have taken a leading role in collecting data and sharing its research with other nations to help control the spread of COVID-19. https://bit.ly/39RyHA3