Launch of Review: Literature and Arts of the Americas, no. 92/93 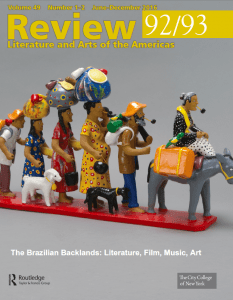 Join The City College of New York’s Department of Classical and Modern Languages & Literatures on April 19, 2017 as they launch Review: Literature and Arts of the Americas – “The Brazilian Backlands: Literature, Film, Music, Art”.

Review 92/93 focuses on the Brazilian Backlands in Literature and Arts. It includes scholarly articles on literature, film, music, and art of the Brazilian Northeast. The issue includes features by a plethora of writers from throughout the region, including: fiction by seminal figures such as José de Alencar, Euclides da Cunha, Gracilano Ramos, and Ariano Suassuna, as well as cordel poetry, and more.