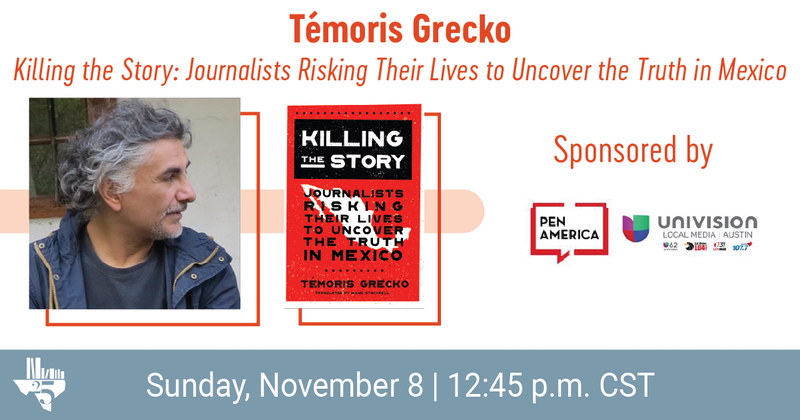 In partnership with Univision and the Texas Book Festival, PEN America Austin is proud to present a conversation with journalist and filmmaker Témoris Grecko, moderated by Hugo Chávez Montes of Univision.

Grecko joins Chávez Montes to discuss a profession sometimes fraught with danger and the role of courage, bravery, and tenacity in journalism. The discussion will be conducted in Spanish with English subtitles.

Register in advance for the event. After registering, you will receive a confirmation email containing information about attending the event on Sunday, November 8 at 12:45pm CT. Copies of Killing the Story: Journalists Risking Their Lives to Uncover the Truth in Mexico are available for purchase via BookPeople.

Témoris Grecko was a producer, researcher, and scriptwriter for two feature documentaries: Watching Them Die: The Mexican Army and the 43 Disappeared (2015) and The Truth Shall Not Be Killed (2018). He’s published six nonfiction books in Mexico and Spain and Killing the Story: Journalists Risking Their Lives to Uncover the Truth in Mexico in the United States. He’s a foreign correspondent with experience in 94 countries, having covered wars and revolutions in Gaza, Egypt, Libya, Syria, Congo, Mali, the Philippines, Myanmar, and elsewhere. Among the awards he has received are a Pantalla De Cristal for Best Research in Documentary Film (Mexico, 2016), a Eurostars Award for Travel Narrative (Barcelona, 2008), and a LASA Award for Merit in Film (New York, 2016).