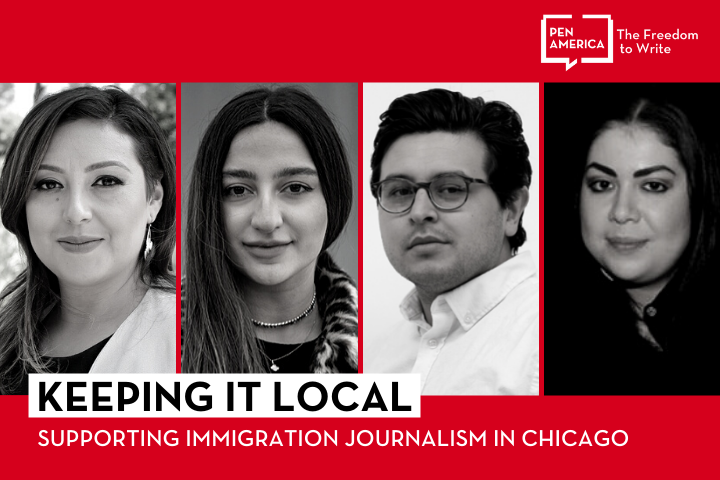 After years ravaged by press layoffs, newsroom shutterings, and attacks on the media, the need for a community-driven rescue mission for local journalism has never been more evident. But first, we must understand the problem and collectively reaffirm how integral local news coverage is to the health of a community, both literally and figuratively. In order to begin this conversation and foster public awareness and grassroots advocacy for local news media, PEN America is launching a series of town hall convenings to bring together members of the press, elected officials, and the public to discuss the landscape of local news in 2021.

This town hall, presented in partnership with Borderless Magazine, will elevate the vital work of those local journalists telling stories of immigrants and immigration in Chicago. It will address the challenges these journalists face such as restricted access to official information, resistance from government officials, and broader barriers to elevating immigrant stories in mainstream media. In addition, the conversation will touch on the impact that the climate of heightened racism and racist violence has on the practice of community journalism in Chicago. The conversation will also address what the Chicago local media landscape could do to better serve immigrant communities such as hiring more immigrants and first-generation American reporters and uplifting more diverse voices.

By bringing together local reporters in conversation with elected officials, this town hall will address what can be done to elevate and bolster the work of journalists serving immigrant communities in Chicago. PEN America will additionally provide resources for community members to engage with their local and state-elected officials and advocate for support for their local news outlets.

Maria Zamudio covers immigration for WBEZ. She is an award-winning investigative reporter who is now part of the race, class, and communities team. Prior to joining WBEZ, she worked for American Public Media’s investigative team. She’s also worked as an investigative reporter for Commercial Appeal and The Chicago Reporter. In 2015, Zamudio and a team of reporters from NPR’s Latino USA received a Peabody Award for their coverage of Central American migrants. Zamudio’s story was reported from the Mexico-Guatemala border, and it focused on the danger women from Central America face while traveling through Mexico as they try to reach the United States. Her work has appeared in The Associated Press, The New York Times, National Public Radio, NBC Chicago, Telemundo, and Univision, among others.

Diane Bou Khalil grew up in Brummana, Lebanon and is fluent in Arabic. Before joining Borderless Magazine as an engagement reporter, Bou Khalil interned at the magazine and worked at the World Relief refugee agency. She studied sociology at Northeastern Illinois University and will graduate with a master’s in international studies from DePaul University in 2022.

Jackie Serrato is a “barrio journalist” and editor-in-chief of the South Side Weekly. She got her start in journalism after launching a bilingual community page with more than 150,000 followers. She also manages Spanish translation at the Sun-Times. Her work has appeared in Hoy/Tribune, The Chicago Reporter, WTTW, BlockClub, and WBEZ. Follow her on Twitter at @HechaEnChicago.

Carlos Ballesteros is a staff reporter at Injustice Watch, a nonprofit investigative outlet based in Chicago. He covers cops, courts, and immigrant communities. Prior to joining Injustice Watch, Ballesteros was at the Chicago Sun-Times, where he covered immigrant and working-class communities of color in the South and West sides of the city, and a digital reporter for Newsweek in New York. He graduated with a bachelor’s in history from Claremont McKenna College in 2016 and interned at The Nation and In These Times magazines. You can reach out to him on Twitter (@ballesteros_312) or via email at carlos@injusticewatch.org.

PEN America and several partner organizations are mobilizing our Members and Americans across the country to use their voice to save local news. Join us by calling on your U.S. senators and representatives to support the Future of Local News Act, which would establish a federal advisory commission to study the decline of local news and propose solutions for the industry’s revitalization.

TELL YOUR MEMBERS OF CONGRESS TO SUPPORT LOCAL NEWS

If you would like to help us spread the word about the Future of Local News Act and/or this town hall series, we hope you’ll check out our social media toolkit to access links, visual assets, and sample copy for you to use in original posts across Facebook, Twitter, and Instagram.

#SalmanRushdie at 2022 PEN America Emergency Congress: "It has been said, and I say it now, that the powerful may own the present but writers own the future... (so that) the present misdeeds of the powerful may be judged and remembered." Read by @DrAmandaForeman & @andreafelliott