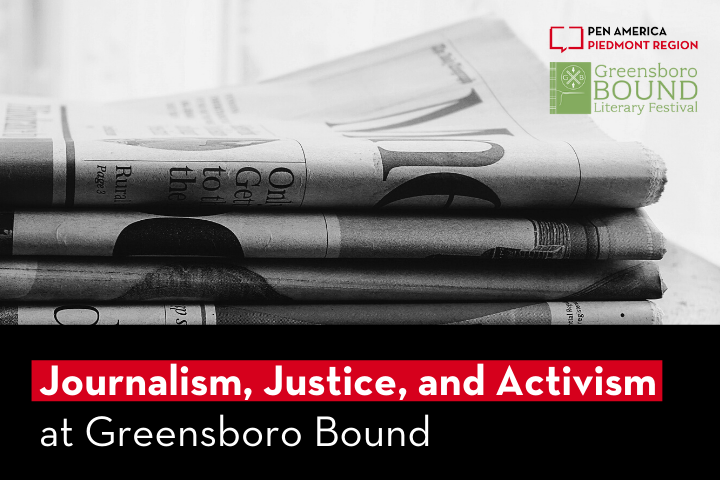 The Greensboro Bound Literary Festival was created in 2017 to create a festival that would bring together readers, writers, students, academics, authors, and volunteers who are passionate about books and literature. Greensboro Bound is the result of more than 200 volunteers, writers, sponsors, and funders coming together to bring the joy of meeting authors, learning, and reading to our community. PEN America Piedmont Chapter is honored to be co-sponsors of two panels at the festival.

Journalists and writers from different backgrounds discuss the importance of engaging equity, criminal justice, and community. The press, as well as citizen journalists, provide witness on systemic issues impacting local communities. A conversation with Dr. Benjamin Gilmer, Wanda Smalls Lloyd and Phoebe Zerwick. Hosted by Deonna Kelli Sayed. This panel is in partnership with the PEN America NC Piedmont Chapter.

Benjamin Gilmer, MD, is a family medicine physician and medical educator. He is an International Albert Schweitzer Fellow for Life and associate professor in the Department of Family Medicine at the University of North Carolina School of Medicine at Chapel Hill and at the Mountain Area Health Education Center (MAHEC). A former neurobiologist turned rural family doctor, Dr. Gilmer has lectured widely about medical ethics, rural health, and the intersection of medicine and criminal justice reform. He is a passionate teacher of medical education and leads MAHEC’s Rural Health Initiative, a program to inspire and train students to pursue rural medicine. The Other Dr. Gilmer is his first book, resulting from a true story he told on This American Life with Sarah Koenig, now one of its most listened to podcasts. The story has inspired Benjamin to be an advocate for prison and mental health reform. He lives with his wife, Deirdre; their two children, Kai and Luya; and their dog, Prince Peanut Butter, in Asheville, North Carolina.

Wanda Smalls Lloyd parlayed her passion for storytelling when she transitioned from journalism to writing non-fiction. Her memoir, COMING FULL CIRCLE: From Jim Crow to Journalism, was published in 2020. The book is an engaging, charmingly written self-reflective volume of stories about growing up as an African-American girl in the Jim Crow South, where despite her segregated circumstances, she dared to become a daily newspaper journalist. She not only became a journalist, but her career took her to some of the highest levels of newsroom positions, and included her work as an editor at The Washington Post and USA Today. She also launched and led university journalism programs as a way to prepare future journalists of color. When Lloyd retired after more than eight years as executive editor of the Montgomery Advertiser in Alabama’s capital city, she accepted a position as associate professor and chair of the Department of Journalism and Mass Communications at Savannah State University. A newspaper editor for more than four decades, she now writes from her home in Savannah, Georgia, the city where she grew up in the 1950s and 1960s. In 2020, Lloyd co-edited (with novelist Tina McElroy Ansa) MEETING AT THE TABLE: African-American Women Write on Race, Culture and Community, a collective of essays written after the tragic deaths of George Floyd, Breonna Taylor, Ahmaud Arbery, and others. Lloyd and Ansa are also co-executive producers and co-hosts of the podcast, 2 Old Chicks Who Know a Lot of Sh*t! on Spotify and YouTube. Spelman College, her alma mater, awarded Lloyd an honorary Doctorate of Humane Letters in 2016. In 2019 she was inducted into the National Association of Black Journalists Hall of Fame.

Phoebe Zerwick is an award-winning investigative journalist, narrative writer, and college teacher. Her writing has appeared in O, The Oprah Magazine; National Geographic; The Nation; the Winston-Salem Journal; and Glamour, among other publications. Her work has been recognized by the Nieman Foundation for Journalism at Harvard University, Investigative Reporters and Editors, the Society of Professional Journalists, Columbia University, and the North Carolina Press Association and featured in the HBO documentary The Trials of Darryl Hunt. She is the director of the journalism program at Wake Forest University.

Deonna Kelli Sayed is an author, TEDx speaker, and performer based in Greensboro, North Carolina. Her short stories and essays are featured in numerous online journals and anthologies. She is the PEN America North Carolina Piedmont Representative and works for the North Carolina Writers’ Network.

Tessie Castillo is an author, journalist, and public speaker who specializes in stories on prison reform, drug policy, restorative justice, and racial equity. She is the editor of Crimson Letters: Voices from Death Row, an original anthology of writings about the death penalty that features entries by Castillo as well as several current residents of North Carolina’s Death Row. In 2021 Crimson Letters was a finalist for the 2021 Eric Hoffer award for excellence in small press publishing and Castillo received the Victor Hassine Memorial Scholarship at American University for using creative work to educate the public on criminal justice issues. Tessie Castillo lives in Durham, North Carolina with her daughter. To see more of her writings or to request a speaking engagement with her and her co-authors, visit www.tessiecastillo.com.

Tara T. Green is an award-winning scholar and professor of African American and African Diaspora Studies at the University of North Carolina in Greensboro. She is the author and editor of six books, including Love, Activism, and the Respectable Life of Alice Dunbar-Nelson and See Me Naked: Black Women Defining Pleasure During the Interwar Era. She is from the suburbs of New Orleans.

Lynden Harris is the founder of Hidden Voices, a radically inclusive, participatory, and co-creative collective committed to a more just and compassionate world. For twenty years, Lynden has collaborated with underrepresented communities to create award-winning works that combine narrative, performance, mapping, music, digital media, and interactive exhibits. During her decades facilitating community connections, Lynden developed a participatory workshop model to empower change through collective visioning and collaborative action. This process facilitates a dynamic exchange between documentary, art, and community that allows for a multiplicity of voices and a multiplexity of understandings. The former Artistic Director of ArtsCenter Stage, Lynden was a founding Cultural Agent for the US Department of Arts and Culture and member of the MAP Fund Class of 2017 for Serving Life: ReVisioning Justice. Lynden is a 2020-21 Fellow with A Blade of Grass, the 2020 recipient of the Ann Atwater Theater Award, and the 2020 North Carolina Playwriting Fellow. Her music theater work-in-development, A GOOD BOY, is currently a semifinalist for the National Music Theater Conference. RIGHT HERE, RIGHT NOW: Life Stories from America’s Death Row was published by Duke University Press in 2021.

Joe Killian is a senior investigative reporter at N.C. Policy Watch. His work takes a closer look at government, politics, and policy in North Carolina and their impact on the lives of everyday people. Before joining Policy Watch, Joe worked in daily newspapers for more than a decade covering cops, courts, local and state government, congressional campaigns and national political conventions. He has worked at the Bristol Press in Bristol, Connecticut; The Cape Cod Times in Hyannis, Massachusetts, and The News & Record in Greensboro, NC. His work has appeared in daily and weekly papers, magazines, and digital-first publications across the state and country. He is currently working on a book about the politicization of the North Carolina’s public university system.