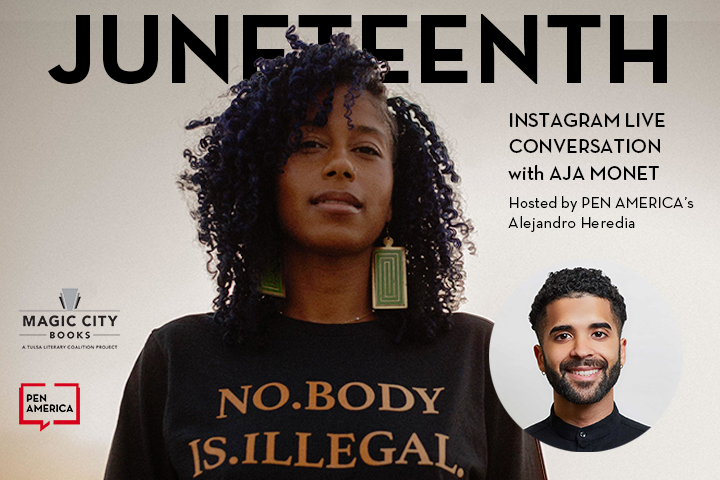 In recognition and celebration of Juneteenth on Friday, June 19, PEN America is partnering with Magic City Books, an independent bookstore in Tulsa, to feature an Instagram Live conversation with poet and activist Aja Monet.

June 2020 marks the 99th anniversary of one of the worst incidents of racial violence in American history—the Tulsa Race Massacre—which resulted in the destruction of a prosperous all-Black community commonly known as Black Wall Street. This year on Juneteenth, also known as Freedom Day—a holiday that celebrates the anniversary of the end of American slavery—we are in the midst of a historic moment in which the United States is being forced to reckon with the pernicious and ubiquitous anti-Blackness that dates back to the original sin of slavery and still plagues all of our state institutions.

The protests that have arisen over the past few weeks, and the renewed energy that they have given to the movement to fight against police violence and systemic racism, is truly astonishing. They have demonstrated, once again, the power and efficacy of free expression in the fight for justice.

Looking ahead to Monet’s takeover of Magic City Books’s Instagram (@magiccitybooks) on Saturday, June 20, this preview conversation with PEN America Community Outreach Manager Alejandro Heredia will speak to the power of poetry to inform the nuanced, complex, and essential conversations happening around racial justice and systemic violence and its intimate relationship to movement building.

If you’re planning to be in Tulsa for Friday’s activities, stop by Magic City Books for a free poster for the rally/march, reading lists, bottled water, books, and more. And be sure to follow Magic City Books on Instagram on Saturday, June 20 to hear more from Aja!

Aja Monet is a Caribbean-American poet, performer, and educator from Brooklyn. She has been awarded the Andrea Klein Willison Prize for Poetry and the Nuyorican Poet’s Café Grand Slam title, as well as the New York City YWCA’s “One to Watch Award.” She is the author of My Mother Was a Freedom Fighter and The Black Unicorn Sings and the coeditor, with Saul Williams, of Chorus: A Literary Mixtape. She lives in Little Haiti, Miami, where she is a cofounder of Smoke Signals Studio and dedicates her time merging arts and culture in community organizing with the Dream Defenders and the Community Justice Project.