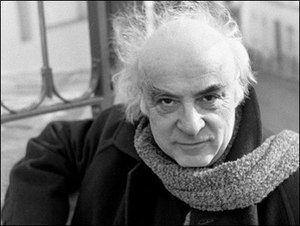 A shifting choral monoglue—part confession, part psychiatric session—Claudio Magris’ Blindly is a voyage into the cavernous depths of the twentieth century. Romania’s Norman Manea, himself a literary giant, will join Magris on stage to discuss literature, philosophy, and exile.

Claudio Magris is one of Europe’s most renowned writers. He is the author of Danube (Farrar, Straus & Giroux) a best-selling novel now translated into more than twenty languages for which he was awarded Spain’s highest literary honor the Prince of Asturias Award for Letter. In 2001 he was awarded the Erasmus Prize.

Norman Manea, winner of the MacArthur, Guggenheim and countless other awards worldwide, is a U.S. citizen, born in Romania. In 1986 he left Romania as the result of Communist persecution. His work has been translated into more than twenty languages, and his prizes include the Nonino International Literary Prize (Italy), The Medicis Etranger (France), and the Nely Sachs Prize (Germany). He is a member of the Berlin Academy of Art, a Fellow of the Royal Society of Literature, and was named by the French government Commandeur dans l’Ordre des Arts et des Lettres.