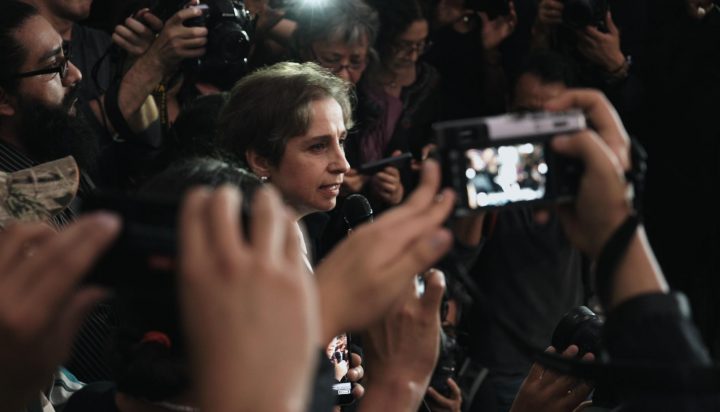 This film will be screened as part of the Human Rights Watch (HRW) Film Festival, which is digital this year due to the coronavirus pandemic. PEN America is a presenting partner of the HRW Film Festival.

To millions of people in Mexico, the incorruptible journalist and news anchor Carmen Aristegui is regarded as the trusted alternative voice to official government spin, fighting daily against deliberate disinformation spread through news sources, government corruption, and the related drugs trade. When she is fired by a radio station in 2015 after revealing a scandal involving then-President Enrique Peña Nieto, Carmen—with her dedicated journalist colleagues—decides to build a separate news platform. Facing threats of violence in the wake of a prominent journalist’s vicious murder, they must overcome fear for their personal well-being to continue in a shared fight for democracy and justice.

Please be advised this film contains material that may be disturbing to some viewers.

U.S. audiences can tune in to watch the film on the HRW Film Festival’s streaming site.

Juliana Fanjul (director) was born in Mexico in 1981. She received her BA in visual communication and attended EICTV’s (International Cinema and TV School of San Antonio de los Baños) documentary department. She has worked as a director’s assistant, and in 2011, participated in an exchange program to live in Switzerland. From 2012 to 2014, she completed her master’s in cinema studies, a joint program between ECAL (École cantonale d’art de Lausanne) and HEAD (Haute école d’art et de design) in Geneva.