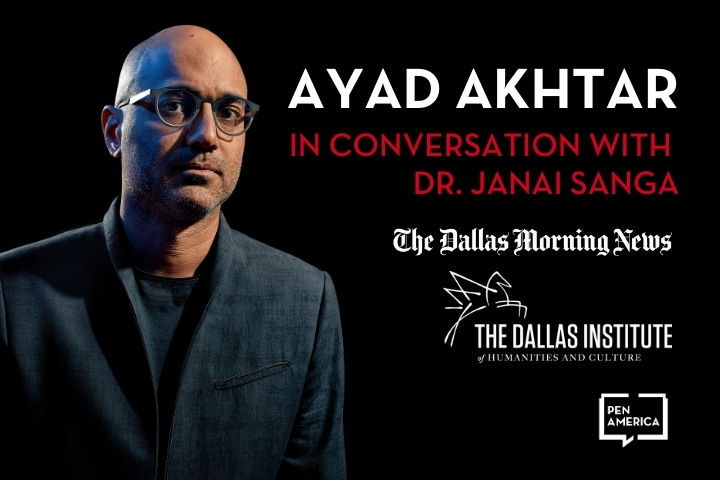 In partnership with The Dallas Institute and The Dallas Morning News, PEN America Dallas/Fort Worth is excited to welcome Ayad Akhtar, president-elect of PEN America. Akhtar will discuss his new novel, Homeland Elegies, on Tuesday, October 6 at 6pm CT.

Drawing on his perspective as the child of Muslim immigrants, Akhtar pens an elegy to the American dream. Part memoir, part fiction, this novel about a father and son searching for belonging paints a picture of disillusionment. Akhtar will be joined by Dr. Jaina Sanga to discuss his latest book and what it means to call a country home.

This event is the second in a three-part series, where six prominent writers engage in candid conversation through a variety of mediums about the issues that matter most to us in this historical moment and how public discourse, stories, and images influence what we aspire to achieve in the realm of action.

Register in advance for the event. After registering, you will receive a confirmation email containing information about attending the event. Copies of Homeland Elegies can be purchased online.

Ayad Akhtar is a novelist and playwright. Akhtar is the winner of numerous awards, including the Pulitzer Prize for Drama and an Award in Literature from the American Academy of Arts and Letters. Akhtar is the author of American Dervish (Little, Brown & Co.) and his latest book Homeland Elegies. As a playwright, he has written Junk (Lincoln Center, Broadway; Kennedy Prize for American Drama, Tony nomination); Disgraced (Lincoln Center, Broadway; Pulitzer Prize for Drama, Tony nomination); The Who & The What (Lincoln Center); and The Invisible Hand (NYTW; Obie Award, Outer Critics Circle John Gassner Award, Olivier, and Evening Standard nominations). As a screenwriter, he was nominated for an Independent Spirit Award for Best Screenplay for The War Within. Among other honors, Akhtar is the recipient of the Steinberg Playwrighting Award, the Nestroy Award, and the Erwin Piscator Award. Akhtar is a Board Trustee at PEN America, the Rockefeller Brothers Fund, and New York Theatre Workshop. Akhtar will be the next president of PEN America.

Dr. Jaina Sanga is a professional writer of both fiction and nonfiction. Currently, she focuses on her fiction writing and has published the novel Silk Fish Opium (2012), a book of short stories; Train to Bombay (2015); and Tourist Season (2017), a book of novellas. Her fiction has won several prizes and led to her selection as a participant in prestigious residencies and workshops both in the U.S. and abroad. Sanga is also a literary scholar, having taught at SMU and the Dallas Institute. She has published a book on Salman Rushdie, edited two volumes on South Asian literature, and authored several articles in scholarly journals in the U.S. and South Asia. She has also made numerous presentations at academic conferences around the world, including those in Berlin, Mumbai, Trinidad, Cape Town, Oviedo (Spain), Chicago, and San Francisco. Sanga has a BA from Hiram College in Ohio, an MA in English literature from Kent State University, and a Ph.D. in English literature from Case Western Reserve University. Sanga was born in Mumbai and now lives in Dallas. She is currently working on her fourth book of fiction, a detective novel set in India and Dubai.