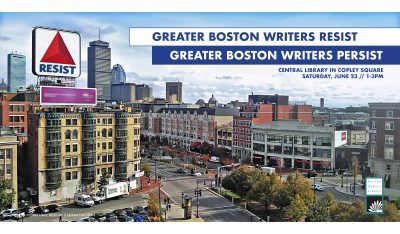 Last January, writers and readers gathered worldwide at Writers Resist events to voice their solidarity in support of free expression in our nation. Since then, First Amendment rights have faced ongoing attacks. Journalists have been told what to write by the press secretary, and authors have been threatened online and subsequently censored when they spoke out. Yet many writers, in Boston and beyond, have committed years and pages to counteracting the work of those in power who would undermine equality, abolish diversity, and silence freedom of expression.

Greater Boston Writers Resist will bring together authors and writers to read their work and talk about the importance of self-expression, writing about politicized issues, and how the political remains deeply personal.

Writers Resist is a national network of writers driven to #WriteOurDemocracy by defending the ideals of a free, just, and compassionate democratic society. #WritersResist

This event is free and open to the public.