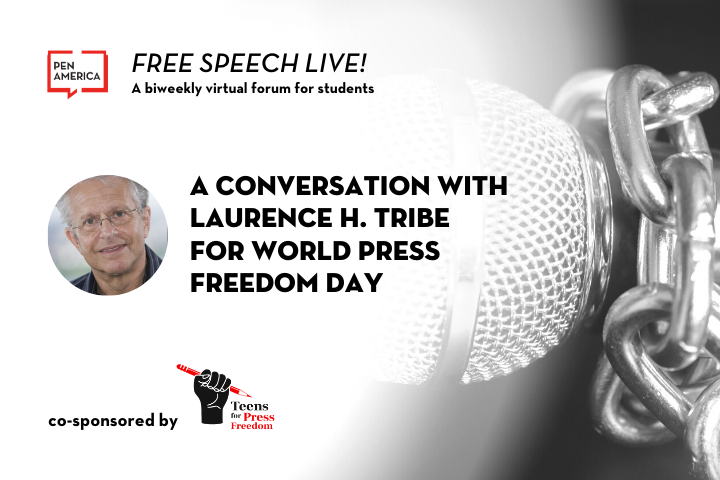 World Press Freedom Day was established by the United Nations in 1993 to celebrate the work of journalists and the fundamental right to information. This year, the theme of this special day is “Information as a Public Good,” centering international attention around the changing media landscape and its impact on democracy. Harvard Law Professor and constitutional scholar Laurence H. Tribe knows the nuances of these democratic challenges well, having authored 115 books and articles; assisted in writing the constitutions of South Africa, the Czech Republic, and the Marshall Islands; and argued 35 cases in the U.S. Supreme Court.

Join PEN America and Teens for Press Freedom for this online forum featuring a brief presentation, discussion, and expert-facilitated Q&A session with Tribe to discuss the challenges and threats to international press freedom today, and what young people can do to help address them. High school and college alumni of PEN America’s youth programs, members of Teens for Press Freedom, and other students are welcome to join.

Former Solicitor General Erwin Griswold wrote: “[N]o book, and no lawyer not on the [Supreme] Court, has ever had a greater influence on the development of American constitutional law,” and the Northwestern University Law Review opined that no one else “in American history has. . . simultaneously achieved Tribe’s preeminence. . . as a practitioner and. . . scholar of constitutional law.”

Nicholas “Niko” Perez is the manager of free expression and education at PEN America. Perez co-directs the Free Speech Advocacy Institute and hosts Free Speech Live!, a biweekly series of youth-oriented discussions focusing on contemporary issues related to free speech, open exchange, human rights, and democracy. Perez previously worked for the Columbia University Human Rights Advocates Program and consulted for the Human Rights Education and Training section at the United Nations. He holds a master’s degree from Columbia University in human rights and humanitarian policy and a bachelor’s degree from Georgetown University in international politics. He also was a Global Leadership Fellow at Waseda University in Japan, a Model United Nations advisor at Mira Costa High School, and a forensics researcher for the Yahad-in Unum genocide research agency.

Charlotte Hampton is a junior at the High School of American Studies at Lehman College and a cofounder of Teens for Press Freedom. She is a dancer in the Alvin Ailey Junior Division, where she studies Limon, Horton, Ballet, and Contemporary. Hampton writes for her school newspaper, Common Sense, as editorial head and is on the Economics Team, Debate Team, and Model UN. She loves to read.

Isabel Tribe is a junior at the High School of American Studies at Lehman College and cofounder of Teens for Press Freedom. This fall, Tribe attended the Mountain School of Milton Academy, a semester school where she worked on a farm and studied environmental science. She studies law and justice at New York University’s High School Law Institute and was an intern for The Brooklyn District Attorney’s Office. As a member of the Whitney Museum of American Art’s Youth Insights Artists program, she loves making and engaging with the arts. She runs cross country and track and field. She loves to read.

About Teens for Press Freedom

State policymakers have proposed a wave of legislation over the past year that would heap fines, fees, and criminal penalties on those seeking to protest. Learn more with PEN America's latest findings: https://bit.ly/3hp7wUk.