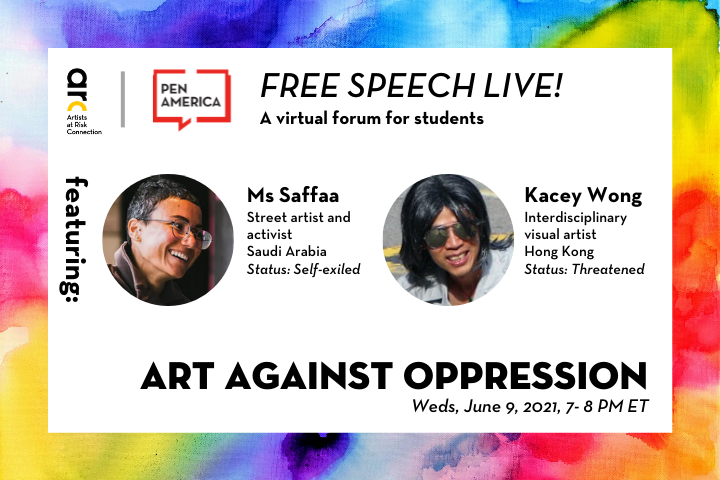 Artistic expression plays a vital role in sustaining democracy and driving social change. Despite freedom of expression being enshrined in international human rights law, many artists around the world are often censored by authoritarian governments, extremist or fundamentalist groups, and other repressive actors. With artists taking risks to counter oppression for the benefit of all, how can young people engage in advocacy and activism to support the right to artistic freedom in their native countries and communities?

Nicholas “Niko” Perez is the manager of free expression and education at PEN America. Perez co-directs the Free Speech Advocacy Institute and hosts Free Speech Live!, a biweekly series of youth-oriented discussions focusing on contemporary issues related to free speech, open exchange, human rights, and democracy. Perez previously worked for the Columbia University Human Rights Advocates Program and consulted for the Human Rights Education and Training section at the United Nations. He holds a master’s degree from Columbia University in human rights and humanitarian policy and a bachelor’s degree from Georgetown University in international politics. He also was a Global Leadership Fellow at Waseda University in Japan, a Model United Nations advisor at Mira Costa High School, and a forensics researcher for the Yahad-in Unum genocide research agency.

Julie Trébault is the director of PEN America’s Artists at Risk Connection project. A highly respected leader in the art world, she brings skills, experience, and a network to launch a new support system for artists at risk worldwide. Prior to joining PEN America, she served as director of public programs at the Museum of the City of New York, where she built a robust roster of panel discussions, performances, screenings, and symposia spanning New York City’s arts, culture, and history. She previously was director of public programs at the Center for Architecture. Before moving to New York, she worked at the National Museum of Ethnology in the Netherlands, where she built a network of 116 museums across the globe that shared a virtual collection of masterpieces and developed an innovative array of online and mobile applications and exhibitions to make the collection as widely accessible as possible. From 2004 to 2007, she was head of higher education and academic events at the Musée du quai Branly (Paris), where she conceived and implemented a policy for higher education by creating an international network of universities, graduate schools, and research institutes. Trébault holds a master’s in arts administration from Sorbonne University, a master’s in archeology from the University of Strasbourg, and teaches at Fordham University.

Kacey Wong, born Wong Kwok-choi, is an award-winning Chinese interdisciplinary artist whose experimental art investigates the relationship between man and environment, questioning the social and political norms within these spaces. Wong was born in Hong Kong in 1970, but has pursued his arts education internationally, studying architecture at Cornell University, earning a master’s degree in sculpture from Chelsea College of Arts, and most recently receiving his Doctor of Fine Arts from Royal Melbourne Institute of Technology. Wong has been making art for over 20 years, but was largely inspired to actively participate in public protest after Chinese dissident artist Ai Weiwei was arrested in 2011. Since then, Wong has been active in the street art community and has used art to draw attention to Hong Kong’s political unrest. In 2013, he began a mock design competition for the logo of Hong Kong’s pro-democracy Umbrella Movement, bringing attention to protest art in Hong Kong through social media.

A multitalented street artist and activist, Ms Saffaa’s artwork has empowered and fueled a social movement opposing Saudi Arabia’s male guardianship laws. Since 2012, Saffaa, who maintains partial anonymity to avoid harassment, has used her artwork to amplify the voices of Saudi women and raise visibility about the repressive conditions and restrictions they face. Currently living in Australia, she has exhibited her work at the Islamic Museum of Australia, in various galleries across Sydney, and internationally. Saffaa has also been commissioned to create murals in Sydney, Melbourne, and Brisbane, and her work has been featured by international media outlets such as The Huffington Post, The Guardian, and The Wall Street Journal.

Nicole Manning is a sophomore at Manhattan Center for Science and Mathematics and is the managing and assistant editor of her school’s newspaper, the MCSM RamPage. This spring, Manning is studying social psychology with the College Now program at The City College of New York. She writes poetry professionally in her free time and was recently received an honorable mention for the New York City Poetry Festival. She also crochets and is trying to start her business this upcoming summer. She also paints and does origami.

Christina Savio is a high school junior and holds an internship at the New Britain Museum of American Art. In 2020, she attended her first PEN America Free Speech Advocacy Institute during the summer and has participated in PEN America events with enthusiasm ever since. She maintains a passion for advocacy, communications, public speaking, debate, and media literacy. Savio’s week includes participating in Women’s Empowerment Club, gospel choir, and Improv and Theater Club along with a rigorous study schedule. She is always motivated to explore history, especially the psychology of historical figures. Savio’s life motto originates with Mark Twain: “Kindness is the language which the deaf can hear and the blind can see.”

Isabel Tribe is a junior at the High School of American Studies at Lehman College and cofounder of Teens for Press Freedom. This fall, Tribe attended the Mountain School of Milton Academy, a semester school where she worked on a farm and studied environmental science. She studies law and justice at New York University’s High School Law Institute and was an intern for The Brooklyn District Attorney’s Office. As a member of the Whitney Museum of American Art’s Youth Insights Artists program, she loves making and engaging with the arts. She runs cross country and track and field. She loves to read.