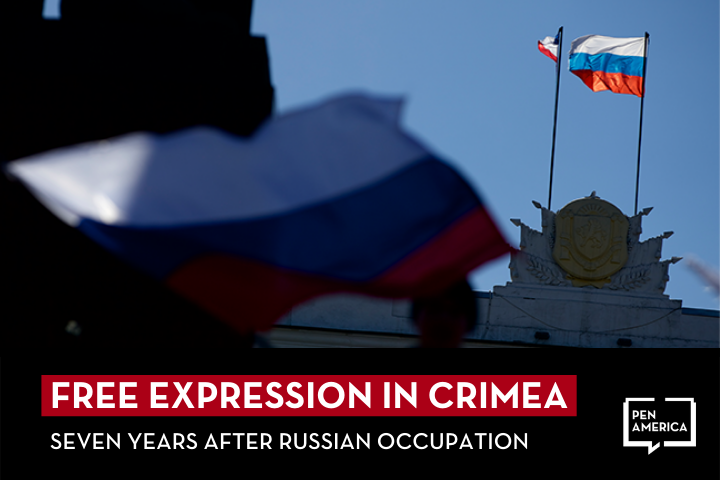 In the seven years since the Russian occupation of Crimea in 2014, circumstances surrounding free expression in the country have grown particularly dire. Join the President of PEN Ukraine Andrei Kurkov, Crimean Tatar blogger and activist Nariman Memedeminov, RFE/RL President and CEO Jamie Fly, and Ukrainian activist and founder of Media Initiative for Human Rights Maria Tomak for a discussion of current free expression issues in Crimea and the international response. The discussion will be followed by an audience Q&A.

Andrey Kurkov is a Ukrainian novelist who writes in Russian and Ukrainian. He is the author of over 20 novels and 10 books for children. His work is currently translated into 37 languages, including English, Japanese, French, Chinese, Swedish, and Hebrew. Kurkov runs creative writing workshops in Ukraine and abroad, and lectures on Ukrainian contemporary literature and sociocultural aspects of life in Ukraine. He is the president of PEN Ukraine.

Nariman Memedeminov is a Crimean Tatar civic journalist and media coordinator of Crimean Solidarity, an initiative launched in Crimea to provide humanitarian assistance to the families of political prisoners as well as to document and highlight human rights abuses in the occupied peninsula. Memedeminov only became a journalist and activist after the occupation and the persecution of Crimean Tatars. He has been under consistent threat since 2016, with officials fining him and searching his home. He refused to stop his media activities until March 2018, when he was arrested on phony charges. A Russian court sentenced him to two and a half years in a penal colony. While imprisoned, many international and professional journalism organizations raised their voices in support of Memedeminov, including Freedom House and the Committee to Protect Journalists. The European Parliament adopted a resolution supporting him. Memedeminov was released in September 2020. However, he is still under certain restrictions. In particular, he is banned from running websites. Memedeminov is a father of three.

Jamie Fly resumed his leadership of Radio Free Europe/Radio Liberty (RFE/RL) as president and chief executive officer on February 16, 2021, following his reappointment by the RFE/RL board of directors. Fly was first named RFE/RL president and chief executive officer on July 10, 2019, effective August 1, 2019. Prior to his appointment, Fly served as a senior fellow, codirector of the Alliance for Securing Democracy, and director of the Future of Geopolitics and Asia programs at The German Marshall Fund of the United States. He served as counselor for foreign and national security affairs to Sen. Marco Rubio (R-FL) from 2013 to 2017, serving as his foreign policy advisor during his presidential campaign. Prior to joining Sen. Rubio’s staff in February 2013, he served as the executive director of the Foreign Policy Initiative (FPI) from its founding in early 2009. Prior to joining FPI, Fly served in the Bush administration at the National Security Council (2008-09) and in the Office of the Secretary of Defense (2005-08). His articles and reviews have been published in a wide variety of outlets in the United States and Europe. For his work in the Department of Defense, he was awarded the Secretary of Defense Medal for Exceptional Public Service. Fly received a BA in international studies and political science from American University and an MA in German and European studies from Georgetown University.

Maria Tomak is a Ukrainian human rights activist, journalist, and researcher, as well as coordinator and cofounder of the Media Initiative for Human Rights. She started volunteering for the Euromaidan SOS initiative during Euromaidan demonstrations, and then began working to document human rights violations in Eastern Ukraine, and after the Russian occupation, in Crimea, reporting on those violations nationally and internationally. In the summer of 2014, Tomak started researching cases of Ukrainian citizens arrested by Russian forces under purported political motivations, and she served as a coordinator of the #LetMyPeopleGo campaign to free them. Today, Tomak focuses on cooperating with Ukrainian institutions to advocate for the release of Ukrainians illegally held by Russian forces. She conducts journalistic investigations of human rights violations related to Russian aggression on both sides of the conflict. Tomak is coauthor of several documentaries dedicated to the bloodiest days on the Euromaidan and the war in Donbas. In 2017, she received a national human rights prize for her personal contribution to defending human rights in Ukraine. In 2020, she obtained a Master of Jurisprudence from the Loyola University School of Law. In recent years, Tomak has partnered with the USAID Human Rights in Action Project as an advocacy expert.

The conviction of a pro-democracy activist "sets a precedent that the mere uttering of any phrase or singing of any song that irks the government can now be deemed as among the most grievous of crimes in Hong Kong." https://bit.ly/376pXXQ

Svetlana Tikhanovskaya told BuzzFeed News that Belarusians’ fight for freedom is a microcosm of the “world’s current struggle between autocracy and democracy.” https://bit.ly/3jaGjnZ

Authorities in Belarus are moving to liquidate @PEN_belarus. Join us in showing our colleagues & friends at PEN Belarus that they're not alone—that we rally to support the freedom to write wherever & whenever it comes under threat: https://bit.ly/3BzY3l4. https://bit.ly/2USdHra