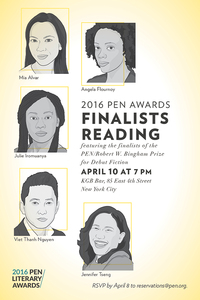 Join PEN and KGB’s Sunday Night Fiction Series for an evening of drinks, readings, and celebration, featuring the five finalists for the 2016 PEN/Robert W. Bingham Prize for Debut Fiction. Each of these debut fiction writers will read excerpts from their nominated works, chosen by judges Helon Habila, Elizabeth McCracken, Edie Meidav, and Jess Row.

Mia Alvar for In the Country: Stories (Alfred A. Knopf)
Angela Flournoy for The Turner House (Houghton Mifflin Harcourt)
Julie Iromuanya for Mr. and Mrs. Doctor (Coffee House Press)
Viet Thanh Nguyen for The Sympathizer: A Novel (Grove Press)
Jennifer Tseng for Mayumi and the Sea of Happiness (Europa Editions)

RSVPs are strongly encouraged. Please write to reservations@pen.org to RSVP.

The winner of the PEN/Robert W. Bingham Prize will be announced the following day at the 2016 PEN Literary Awards Ceremony.

At the reading, copies of each of the finalists’ books will be available for purchase courtesy of WORD Bookstores.

Mia Alvar was born in Manila and grew up in Bahrain and New York City. Her work has appeared in One Story, The Missouri Review, FiveChapters, The Cincinnati Review, and elsewhere. She has received fellowships from the Lower Manhattan Cultural Council, Yaddo, and the Djerassi Resident Artists Program. A graduate of Harvard College and Columbia University, she lives in New York City.

Julie Iromuanya is the author of Mr. and Mrs. Doctor (Coffee House Press, 2015). Her creative writing has appeared in The Kenyon Review, Passages North, the Cream City Review, and the Tampa Review, among other journals. Iromuanya earned her Ph.D. at the University of Nebraska-Lincoln. She is currently an assistant professor of English and Africana literature in the University of Arizona creative writing MFA program.

Viet Thanh Nguyen is an associate professor of English and American Studies and Ethnicity at the University of Southern California. He is the author of Race and Resistance: Literature and Politics in Asian America (Oxford University Press, 2002). The Sympathizer (Grove/Atlantic, 2015) is his first work of fiction.

Jennifer Tseng is the author of two award-winning poetry books. Her debut novel, Mayumi and the Sea of Happiness (Europa Editions, 2015), has been featured in the Boston Globe, LA Times, Huffington Post, Elle, Financial Times, and elsewhere. She teaches for the Fine Arts Work Center’s online writing program, 24 Pearl St.