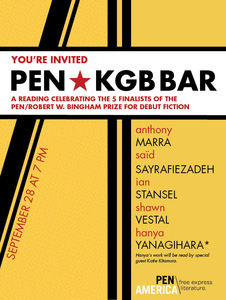 Join PEN staff, awards judges, and supporters for an evening of drinks, readings, and celebration on the eve of the Awards Ceremony where the winner of the PEN/Robert W. Bingham Prize will be announced.

The event will feature the five finalists for the PEN/Robert W. Bingham Prize for Debut Fiction, who will be reading excerpts from their works, nominated by award judges Charles Bock, Jonathan Dee, Fiona Maazel, and Karen Shepherd.

At the reading, copies of each of the finalists’ debut works of fiction will be available for purchase courtesy of WORD Bookstores.

A Constellation of Vital Phenomena (Hogarth), Anthony Marra
Anthony Marra is the winner of a Whiting Award, Pushcart Prize, and the Narrative Prize. A Constellation of Vital Phenomena won the 2014 National Book Critics Circle’s inaugural John Leonard Prize and the 2014 Anisfield-Wolf Book Award in fiction, as well as the inaugural 2014 Carla Furstenberg Cohen Fiction Award. Marra’s novel was a National Book Award long list selection as well as a shortlist selection for the Flaherty-Dunnan first novel prize. In addition, his work has been anthologized in The Best American Nonrequired Reading 2012. He received an MFA from the Iowa Writers’ Workshop and was a Stegner Fellow at Stanford University, where he now teaches as a Jones Lecturer in Fiction. He has lived and studied in Eastern Europe, and now resides in Oakland, CA. A Constellation of Vital Phenomena is his first novel.

Brief Encounters With the Enemy (The Dial Press), Saïd Sayrafiezadeh
Saïd Sayrafiezadeh was born in Brooklyn and raised in Pittsburgh. He is the author of a memoir, When Skateboards Will Be Free. His writing has appeared in The New Yorker, The Paris Review, Granta, McSweeney’s, The New York Times Magazine, and The Best American Nonrequired Reading, among other publications. He lives in New York City and teaches at New York University.

Everybody’s Irish (FiveChapters Books), Ian Stansel
Ian Stansel is a writer, editor, and teacher whose collection of stories, Everybody’s Irish(FiveChapters 2013) is long-listed for the PEN/Bingham prize for debut fiction. He holds an MFA in fiction writing from the Iowa Writers’ Workshop and a PhD in literature and creative writing from the University of Houston, where he was the editor of Gulf Coast. His fiction has appeared in numerous literary journals, including Ploughshares, Joyland, Ecotone, Cincinnati Review, Antioch Review, and Sycamore Review. His stories have been selected for inclusion in the 2012 and 2013 editions of the New Stories of the Midwest anthology series and shortlisted for Best American Short Stories. His nonfiction has appeared on Salon and The Good Men Project. A former blogger for Ploughshares, he now he serves as fiction editor of the online literary journal Memorious. Raised in Chicago and northern California, he currently lives in Ohio with his wife, writer Sarah Anne Strickley, and their daughter Simone.

Godforsaken Idaho (Little A/New Harvest), Shawn Vestal
Shawn Vestal is a columnist and reporter for The Spokesman-Review in Spokane, where he’s worked for many years as a journalist and editor. He was raised in the Mormon faith. His stories have appeared in McSweeney’s, Tin House, American Short Fiction, EcoTone, Best American Fantasy, and other places.

*Unable to attend; her work will be read by a special guest reader to be announced.

Take part in our “Future Fiction of America” contest for the Bingham Winner of 2114. Entries accepted until midnight after the Bingham readings at KGB. Winner will be announced live by Ben Greenman at the 2014 Literary Awards: