As demands to remove books from schools have reached a fever pitch, students have emerged as some of the most effective advocates for public access to diverse literature. Join us on Wednesday, December 15 for a nationwide teach-in about how to stand up for diversity and representation on the bookshelf. Come learn from a range of anti-censorship experts, authors, and student activists from York, PA; Southlake, TX; and Kansas City, MO, and leave with the tools to challenge book removals, organize protests, and mobilize your community against this alarming, national trend. 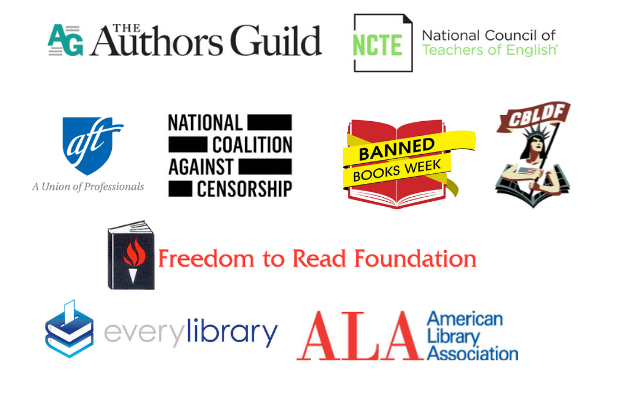 Neil Gaiman is the author of numerous New York Times bestsellers, including Neverwhere, American Gods, The Ocean at the End of the Lane, and the Sandman series of graphic novels. He is credited with being one of the creators of modern comics, as well as an author whose work crosses genres and reaches audiences of all ages. His fiction has received Newbery, Carnegie, Hugo, Nebula, World Fantasy, and Will Eisner Awards. He is a creator of works of prose, poetry, film, journalism, comics, song lyrics, and drama. Gaiman is currently writing and showrunning both Good Omens Season 2 and Anansi Boys for Amazon. Photo Credit: Beowulf Sheehan

George M. Johnson is an award-winning Black nonbinary writer, author, and activist located in the NYC area. Johnson has written for major outlets including Teen Vogue, Entertainment Tonight, NBC, The Root, Buzzfeed, Essence, Ebony, them, and theGrio. They have also served as guest editor for BET.com’s Pride Month. In 2019, they were awarded the Salute to Excellence Award by the National Association of Black Journalists for their article “When Racism Anchors your Health in Vice Magazine.” In 2020, they were named to The Root 100 Most Influential African Americans. Their debut young adult memoir, All Boys Aren’t Blue, was published in 2020. Their next YA memoir, We Are Not Broken, was released on September 7, 2021. Johnson is also a proud HBCU alum twice over, and a member of Alpha Phi Alpha Fraternity, Inc.

Ashley Hope Pérez is the author of three novels: Out of Darkness (2015), The Knife and the Butterfly (2012), and What Can’t Wait (2011). Out of Darkness was described by The New York Times Book Review as a “layered tale of color lines, love and struggle in an East Texas oil town,” and was selected as a best book of the year by both Kirkus Reviews and School Library Journal. It received a 2016 Michael L. Printz Honor for Literary Excellence in Young Adult Fiction, the 2016 Tomás Rivera Book Award, and the 2016 Américas Award. What Can’t Wait and The Knife and the Butterfly appear on YALSA’s Best Fiction for Young Adults and Popular Paperbacks lists. Pérez grew up in Texas and taught high school in Houston before pursuing a doctorate in comparative literature. She is currently assistant professor of world literatures at The Ohio State University.

Christine Emeran is youth free expression program director with the National Coalition Against Censorship (NCAC). In previous roles, she served as a research consultant at UNESCO and UNESCO-International Institute for Education Planning in Paris, France, including initiatives on knowledge societies, primary education decentralization policies, youth program on climate change, and lifelong learning. Dr. Emeran is the author of New Generation Political Activism in Ukraine 2000–2014 (Routledge, 2018) and a book chapter titled “The March for Our Lives Movement in the USA: Generational Change and the Personalization of Protest” featured in a global social movement book series, When Students Protest: Secondary and High Schools (Rowman & Littlefield Publishers, 2021). Her journal service includes manuscript refereeing at Demokratizatsiya: The Journal of Post-Soviet Democratization and Observatorio. In her academic career, Dr. Emeran has taught sociology at St. John’s University and Manhattan College and political science courses on social movements at Sciences Po in Paris. She holds a Ph.D. in sociology from The New School for Social Research in New York, MA in international education from New York University, and a BA/BS in international business from American University.

Jonathan Friedman is the director of free expression and education at PEN America, where he oversees advocacy, analysis, and outreach to educational communities and academic institutions. In this role, he drives forward PEN America’s efforts to catalyze a more informed, civic culture through free expression education for the rising generation and the general public. Friedman served as lead author on PEN America’s 2019 report, Chasm in the Classroom: Campus Free Speech in a Divided America, and on the production of its digital Campus Free Speech Guide. He regularly provides commentary on campus free speech issues for national news media and has facilitated workshops and conducted advisory meetings with students, faculty, and administrators at dozens of colleges and universities across the United States.

📢 12 January marks the grim one year anniversary of detention of political prisoners and HRDs #AndreiAliaksandrau and #IrinaZlobina in #Belarus. We join @ARTICLE19org & @IndexCensorship to show solidarity with Andrei and Irina and demand their release. #FreeAndreiAndIrina