“Erasure of Black Thought” was a conversation among Black academics that unpacked the current challenges to freedom of expression in schools, colleges, and the public sphere in regards to racism, history, and diversity (i.e. critical race theory). The event offered a clear-eyed view of the current slate of censorious threats, while also providing concrete action items to push back against them.

Dr. Blair LM Kelley is assistant dean for Interdisciplinary Studies and International Programs in the College of Humanities and Social Sciences and associate professor of History at North Carolina State University. Kelley is currently at work on a new book, Black Folk: The Promise of the Black Working Class, for Liveright/W. W. Norton and Company, which was awarded a 2020 Creative Nonfiction Grant by the Whiting Foundation. Her first book, Right to Ride: Streetcar Boycotts and African American Citizenship, won the Letitia Woods Brown Book Prize for best book from the Association of Black Women Historians. Active inside the academy and out, Kelley has produced and hosted her own podcast and has been a guest on CNN Tonight with Don Lemon, MSNBC’s All In and Melissa Harris-Perry show, NPR’s Here & Now, and WUNC’s The State of Things. She has written for The New York Times, The Washington Post, The Root, TheGrio, Ebony, Salon, and Jet magazine. Highlighted as one of the top-tweeting historians by History News Network, Kelley was among the first generation of historians active on Twitter. She has been tweeting as @profblmkelley for more than 12 years, and she has over 43,000 followers. Kelley received her BA from the University of Virginia in history and African and African American studies. She earned her MA and Ph.D. in history, and graduate certificates in African and African American studies and women’s studies at Duke University.

Jennifer Christine Nash is the Jean Fox O’Barr Professor of Gender, Sexuality, and Feminist Studies at Duke University. She earned her Ph.D. in African American studies at Harvard University and her J.D. at Harvard Law School. She is the author of three books: The Black Body in Ecstasy: Reading Race, Reading Pornography (awarded the Alan Bray Memorial Book Award by the GL/Q Caucus of the Modern Language Association), Black Feminism Reimagined (awarded the Gloria Anzaldúa Book Prize by the National Women’s Studies Association), and Birthing Black Mothers. She is also the editor of Gender: Love (Macmillan Reference USA, 2016). Her research has been supported by the ACLS/Burkhardt Residential Fellowships, Radcliffe Institute for Advanced Study, and the Woodrow Wilson National Fellowship Foundation’s Career Enhancement Fellowship Program.

Danielle Purifoy is an assistant professor in the Department of Geography at The University of North Carolina at Chapel Hill. Purifoy completed a Ph.D. in environmental politics and African American studies at Duke University. Purifoy earned a BA in English and political science from Vassar College, and a J.D. from Harvard Law School. Purifoy’s current research traces the roots of contemporary environmental conditions in the U.S. South, specifically in Black towns dating back to the postbellum era. Purifoy has also written about the legal dimensions of environmental justice and equity in food systems. Purifoy is the former Race & Place editor at Scalawag, a magazine devoted to Southern politics and culture, and the current board chair of the North Carolina Environmental Justice Network. 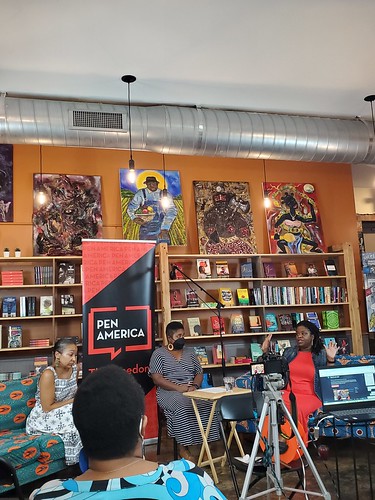 Join PEN America and @center_higher for "Campus for All" a special workshop series for faculty on balancing tensions between free speech, academic freedom, and diversity and inclusion in the classroom! Program runs 1/11-1/14, 2:30-4:30PM ET. Register at https://bit.ly/3d3p2dI.