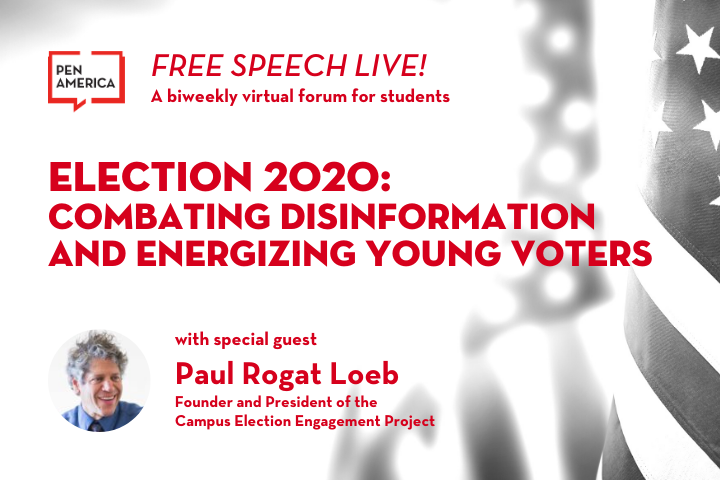 The 2020 general election will be unlike any previous election, happening against the backdrop of a pandemic, and with disinformation running rampant. It’s vital that young voters know what to expect: from wait times at polling stations to the need to fact-check news. The media’s early reporting on results might also look different than usual, and there may be delays in results due to the tabulation of a high volume of mail-in ballots. The bottom line: Young voters need to be prepared to expect the unexpected during this election season, and nevertheless, persist to mobilize their families, friends, and communities to vote!

Paul Rogat Loeb has spent 45 years researching and writing about citizen responsibility and empowerment—to learn what makes some people choose lives of social commitment, while others abstain. He’s written five widely praised books with 350,000 copies in print, including Soul of a Citizen, The Impossible Will Take a Little While, and Generation at the Crossroads. He’s also written on social involvement for The New York Times, The Washington Post, The Huffington Post, USA Today, Los Angeles Times, AARP Bulletin, The Chronicle of Higher Education, Psychology Today, Redbook, Inside Higher Ed, Christian Science Monitor, Parents Magazine, and the International Herald Tribune. Loeb has been interviewed on CNN, NPR, PBS, C-SPAN, Fox News, NBC TV, the BBC, Canadian Broadcasting Corporation, Voice of America, and national German and Australian radio, and has lectured on over 400 college campuses.

Margaret Flynn-Sapia is the advocacy coordinator at PEN America’s Washington, D.C. office. Flynn-Sapia has worked at a number of human rights and free speech organizations, including Index on Censorship in London, the Albert Einstein Institution in Boston, and the Debate Foundation in Amman, Jordan. Flynn-Sapia graduated with a degree in sociology and Middle Eastern studies from Wellesley College, and was recently a Critical Language Scholar at the U.S. Department of State in Morocco.