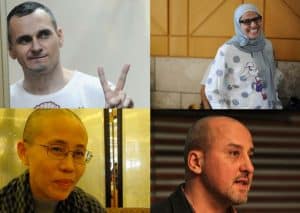 On August 25, 2015, the Ukrainian filmmaker Oleg Sentsov was sentenced to 20 years in a Russian prison as part of a government effort to silence a powerful voice of dissent. This year, following his recognition as the PEN/Barbey Freedom to Write Award winner, artists and writers will gather on the second anniversary of Sentsov’s sentencing to stand in solidarity with him and with artists suffering persecution around the world.

“Distant Lives, Forbidden Voices” is a public performance action presented by PEN America with its new project the Artists at Risk Connection (ARC) and hosted by the High Line to elevate the creative visions of individuals fighting government repression. A range of exciting new literary voices will gather to read and share work by Sentsov, Liu Xia, Dareen Tatour, and other artists and writers at risk worldwide. Hala Alyan, Ana Božičević, Alexander Chee, Farnoosh Fathi, Marwa Helal, and Luis Jaramillo are part of the growing list of participants.

The event serves to connect the literary and artistic communities in the United States with global efforts for free expression and to expand the audience for the very art and literature that tyrannous governments so deeply want to stifle. The evening will be hosted in a site-specific gathering space conceived by the artist Radamés “Juni” Figueroa as part of the High Line’s open-air group exhibition, Mutations, which looks at how boundaries between the natural world and culture are defined, crossed, and obliterated.

Join us on August 25 for this community event in celebration of free expression and creative solidarity. Register »