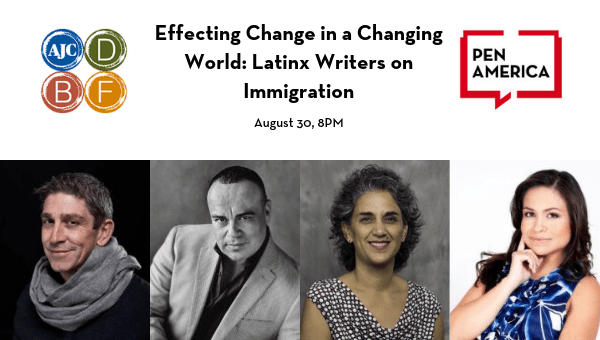 Emmy Award-winning broadcast journalist Mariela Romero will moderate a timely discussion centered on the nuanced and multi-layered immigrant experience here in the United States. Incorporating topics such as the power of Latinx literature, free expression, and notions of home and identity, Romero will be joined in conversation by Richard Blanco, the fifth person in U.S. history selected to write and deliver an inaugural poem and whose collection of poems, How to Love a Country, was recently released; Rigoberto González, award-winning poet and author of the memoir What Drowns Flowers in Your Mouth; and Gabriela Ventura Baeza, executive editor of Arte Publico Press, the oldest publisher of contemporary and recovered Latinx writing in the United States.

Tickets for the Keynote  are required, free, and limited to two per person. Tickets are available beginning August 13 at 2PM through the Emory Schwartz Center Box Office and the following independent booksellers: A Cappella, Charis Books and More, Eagle Eye Books, Little Shop of Stories and Tall Tales Book Shop.

Learn more about how to attend the festival here.

Richard Blanco served President Obama as the fifth inaugural poet in U.S. history, the youngest and the first Latino, immigrant, and gay person to serve in such a role. The negotiation of cultural identity characterizes his three collections of poetry: City of a Hundred Fires, which received the Agnes Starrett Poetry Prize from the University of Pittsburgh Press; Directions to The Beach of the Dead, recipient of the Beyond Margins Award from the PEN American Center; and Looking for The Gulf Motel, recipient of the Paterson Poetry Prize and the Thom Gunn Award. He has also authored the memoirs For All of Us, One Today: An Inaugural Poet’s Journey and The Prince of Los Cocuyos: A Miami Childhood, winner of a Lambda Literary Award. He is a Woodrow Wilson Fellow and has taught at Georgetown University, American University, and Wesleyan University.

Rigoberto González is the author of 17 books of poetry and prose. His awards include Guggenheim, NEA, NYFA, and USA Rolón fellowships, the American Book Award from the Before Columbus Foundation, the Lenore Marshall Prize from the Academy of American Poets, and the Shelley Memorial Award from the Poetry Society of America. A critic at large for The L.A. Times, he sits on the board of trustees of the Association of Writers and Writing Programs (AWP) and is currently professor of English at Rutgers-Newark, the State University of New Jersey.

Gabriela Baeza Ventura, Ph.D. is an associate professor of Spanish with a specialization on US Latinx literature in the Department of Hispanic Studies at the University of Houston. She holds an MA from the University of New Mexico in Albuquerque and a Ph.D. from the University of Houston. Baeza Ventura has published on various aspects of US Latino literature, including women, immigration, recovery works, language, and YA and children’s literary production. She is currently co-editing a volume for the Debates in the Digital Humanities Series titled Built on Biases: Injustice in the Information Age with the University of Minnesota Press. Baeza Ventura also works as Executive Editor for Arte Público Press where she supervises the production of over thirty titles a year that include adult, young adult, and bilingual children’s books.

Mariela Romero is the Univision Communications Regional Community Empowerment Director in Philadelphia, Raleigh and Atlanta and is anchor and producer of news magazine Conexión Fin de Semana in all three markets. Romero has interviewed former President and Nobel Peace Prize Laureate Jimmy Carter, Civil Rights leader and Presidential Medal of Freedom Awardee, Reverend C.T. Vivian, and American labor leader Dolores Huerta among other distinguished public figures. Mariela has received 21 Emmy Awards from the Academy of Television Arts – South East region – and in 2018 was named by the Georgia Hispanic Chamber of Commerce one of the 50 most influential Latinos in the State. In 2019 she was awarded the Olga C. de Goizueta Award by The Latin American Association. Mariela holds a degree in Journalism from Universidad Católica Argentina as well as a degree in Social Communications from Universidad de Belgrano. She also studied TV Broadcasting and Production in Buenos Aires, Argentina. She is a native of Caracas, Venezuela.

Join us tomorrow at 4:00pm EDT with @publishorperish of @Cronkite_ASU,
@SuzanneNossel of @PENamerica, and @kylepope of
@CJR for the next remote event in our #FreeSpeechProject series with @FutureTenseNow More here:

[email protected] is tightening its content rules and banning conspiracy theories linking coronavirus to #5G networks from its platform. https://bbc.in/2wnfOXZ

In a move to reduce misinformation, @WhatsApp has restricted the forwarding of content. https://reut.rs/39X7k7K