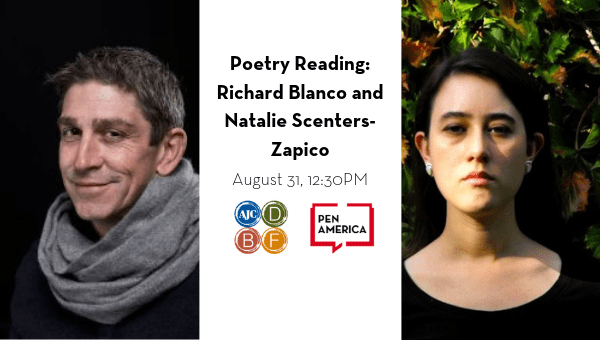 Richard Blanco’s How to Love a Country is a new collection from the renowned inaugural poet exploring immigration, gun violence, racism, LGBTQ issues, and more in accessible and emotive verses. In her striking second collection, Lima :: Limón, Natalie Scenters-Zapico sets her unflinching gaze once again on the borders of things. Join these two poets as they read from their new works.

Richard Blanco served President Obama as the fifth inaugural poet in U.S. history, the youngest and the first Latino, immigrant, and gay person to serve in such a role. The negotiation of cultural identity characterizes his three collections of poetry: City of a Hundred Fires, which received the Agnes Starrett Poetry Prize from the University of Pittsburgh Press; Directions to The Beach of the Dead, recipient of the Beyond Margins Award from the PEN American Center; and Looking for The Gulf Motel, recipient of the Paterson Poetry Prize and the Thom Gunn Award. He has also authored the memoirs For All of Us, One Today: An Inaugural Poet’s Journey and The Prince of Los Cocuyos: A Miami Childhood, winner of a Lambda Literary Award. He is a Woodrow Wilson Fellow and has taught at Georgetown University, American University, and Wesleyan University.

Natalie Scenters-Zapico is from the sister cities of El Paso, Texas, U.S.A., and Cd. Juárez, Chihuahua, México. Her poems have appeared in a wide range of anthologies and literary magazines including Best American Poetry 2015, POETRY, Tin House, Kenyon Review, and more. Currently, she holds fellowships from the Lannan Foundation and CantoMundo. Scenters-Zapico is a Professor of Literature at Bennington College and a recipient of the 2018 Ruth Lilly and Dorothy Sargent Rosenberg Fellowship from the Poetry Foundation. In Fall 2019, she will be joining the faculty at the University of Puget Sound in Tacoma, Washington.