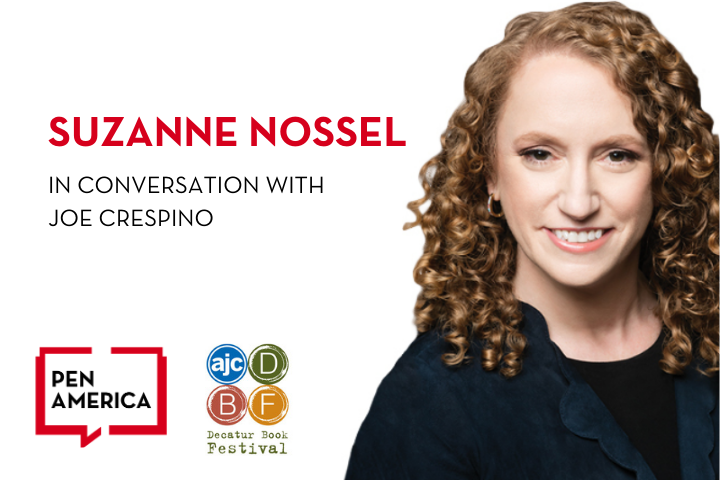 In partnership with Georgia Humanities and the AJC Decatur Book Festival, PEN America is excited to welcome Suzanne Nossel, CEO of PEN America, for a virtual event to discuss her new book. Dare to Speak: Defending Free Speech for All is a playbook for navigating and defending free speech today, for paving a pathway that promotes free expression while also cultivating a more inclusive public culture. Centered on practical principles, Nossel’s primer equips readers with the tools needed to speak one’s mind in today’s diverse, digitized, and highly-divided society without resorting to curbs on free expression. The conversation will be moderated by Jimmy Carter Professor of History at Emory University Joe Crespino.

Register in advance for the event on Wednesday, October 14 at 6:30pm ET. Copies of Dare to Speak can be purchased on Bookshop. (10 percent of all sales of the book through this link on Bookshop go to PEN America.)

Joseph Crespino is the Jimmy Carter Professor of History at Emory University. He is an expert in the political and cultural history of the 20th-century United States, and of the history of the American South since Reconstruction. His research has been supported by fellowships from the National Endowment for the Humanities and the National Academy of Education. In 2014, he served as the Fulbright Distinguished Chair in American Studies at the University of Tubingen, and he has been named a Distinguished Lecturer by the Organization of American Historians. Crespino has published three books, has co-edited a collection of essays, and has written for academic journals as well as for popular forums such as The New York Times, The Washington Post, Politico, and The Wall Street Journal. His most recent book, Atticus Finch: The Biography—Harper Lee, Her Father, and the Making of an American Icon, was published in 2018 by Basic Books.

Another colleague, Belarusian poet Dmitry Strotsev, found in the notorious Akrestina prison. Another cultural figure got 13 days in prison for peacefully protesting the regime! Please support #Belarus and do share! https://twitter.com/pen_belarus/status/1318999697948921861

Whether it's in your inbox or on your social media feeds, how can you spot, check &stop the spread of election disinformation? Head to http://pen.org/whattoexpect to find resources, webinars & more to combat disinformation and misinformation this election season. #WhatToExpect2020

If you see your friends and family sharing misinformation, don’t ignore it!

Check out @PENAmerica’s tipsheet on how to talk with your friends and family who share misinformation.