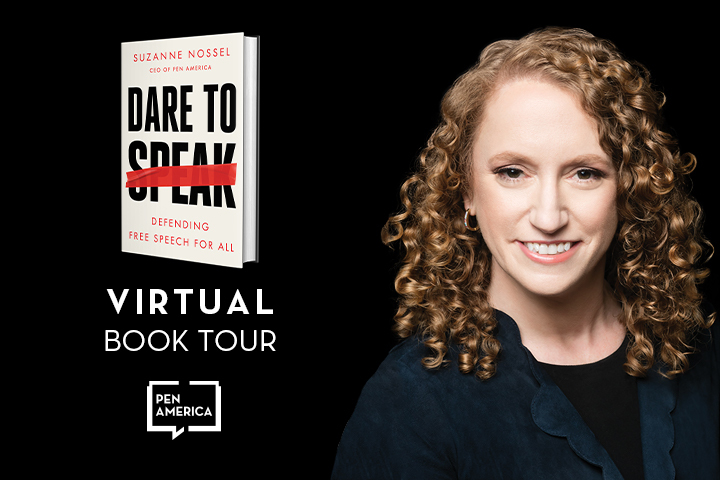 Suzanne Nossel, CEO of PEN America, shares her playbook for navigating and defending free speech today, for paving a pathway that promotes free expression while also cultivating a more inclusive public culture. Preorder Nossel’s book, Dare to Speak, today on Bookshop. (10 percent of all sales of the book through this link on Bookshop go to PEN America.)

Cancel culture versus censorship. Online trolls and fascist chat groups. Controversies over campus lectures. The daily hazards and debates surrounding free speech are everywhere. In an era where one tweet can launch—or end—your career, and where free speech is often invoked as a principle but rarely understood, learning to maneuver the fast-changing, treacherous landscape of public discourse has never been more urgent. Nossel delivers a vital, necessary guide to maintaining democratic debate that is open and free-wheeling but at the same time respectful of the rich diversity of backgrounds and opinions in a changing country. Centered on practical principles, her primer equips readers with the tools needed to respectfully speak one’s mind in today’s diverse, digitized, and highly-divided society without resorting to curbs on free expression.

Nossel is joined by Pulitzer Prize-winning playwright and novelist Ayad Akhtar to bring much-needed clarity and guidance to this pressing—and often misunderstood—debate.

This event is co-presented with The New York Public Library.

Ayad Akhtar is a novelist and playwright. His work has been published and performed in over two dozen languages. He is the winner of the Pulitzer Prize for Drama and an Award in Literature from the American Academy of Arts and Letters. Ayad is the author of American Dervish, published in over 20 languages and named a Kirkus Reviews Best Book of 2012, as well as the forthcoming novel, Homeland Elegies (September 2020). As a playwright, he has written Junk (Lincoln Center, Broadway; Kennedy Prize for American Drama, Tony nomination), Disgraced (Lincoln Center, Broadway; Pulitzer Prize for Drama, Tony nomination), The Who & The What (Lincoln Center), and The Invisible Hand (NYTW; Obie Award, Outer Critics Circle John Gassner Award, Olivier, and Evening Standard nominations). As a screenwriter, he was nominated for an Independent Spirit Award for Best Screenplay for The War Within. Among other honors, Akhtar is the recipient of the Steinberg Playwrighting Award, the Nestroy Award, the Erwin Piscator Award, as well as fellowships from the American Academy in Rome, MacDowell, the Sundance Institute, and Yaddo, where he serves as a Board Director. Additionally, Ayad is a Board Trustee at PEN America and New York Theatre Workshop. He lives in New York City.