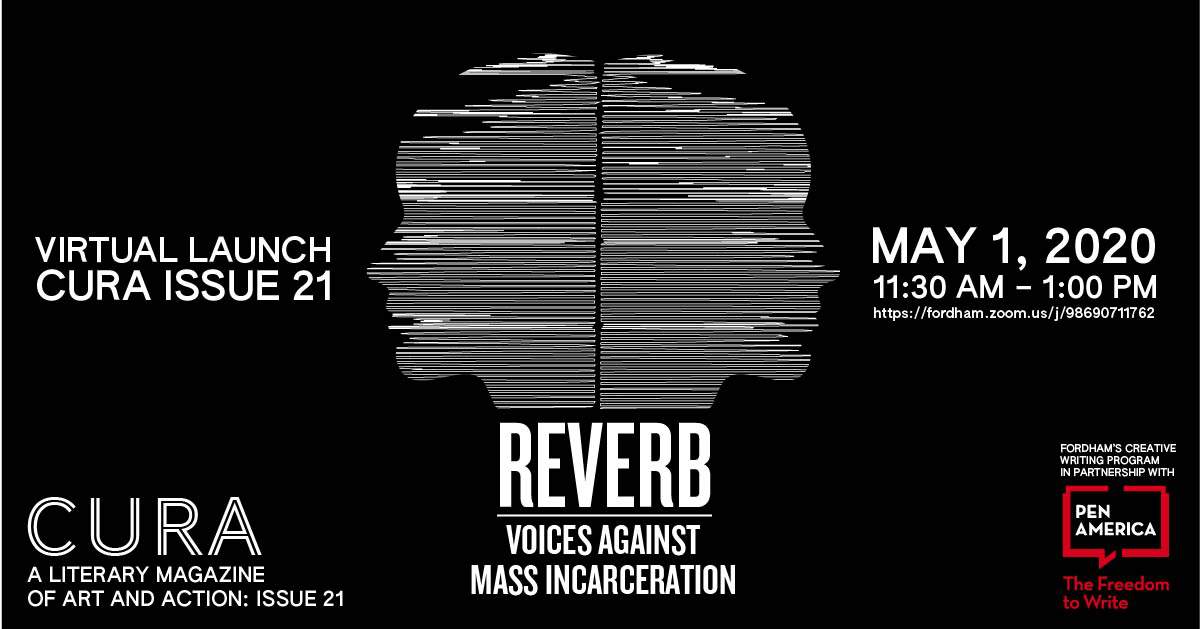 Join us for the launch of the 2020 issue of CURA: A Literary Magazine of Art and Action. Entitled “REVERB,” and inspired by Bryan Stevenson’s Just Mercy, this issue honors the many voices that echo across time and space in protest of mass incarceration.

Placing these important works in conversation is crucial to the project of bearing witness to the injustice that exists in our country, and imagining new worlds.

RSVP here to receive a reminder straight to your inbox, or simply join us on Zoom at the time of the event!

While the launch is free, any funds raised will be donated to the Black Mama’s Bailout Fund. You can donate through CURA‘s Go Fund Me.

Aaron Samuels will be reading the work of Sterling Cunio, a 2019-2020 PEN America Writing For Justice Fellow, a 2019 Oregon Literary Arts Fellow and a two-time PEN America Prison Writing Award winner. Published in The Marshall Project, Sterling’s currently a University of Oregon undergrad majoring in crime, law and society. At age 16, Sterling was sentenced to life without parole and has spent twenty-six years in prison where he’s devoted himself to hospice volunteering, mentoring younger prisoners, transforming the culture of street crime and building peace. Sterling is a frequent contributor to community-based efforts to raise awareness around issues of mass incarceration, food scarcity, and Restorative Justice.

Aaron Samuels is the author of Yarmulkes & Fitted caps, released by Write Bloody Publishing.  He is the recipient of fellowships from Cave Canem, Asylum Arts, and the Millay Colony for the Arts.  Samuels is a founding member of the Dark Noise Collective and ranked 3rd place at the Individual World Poetry Slam.  He currently lives in Los Angeles where he serves as Co-Founder and COO of Blavity Inc.

Carlos Andrés Gómez is a Colombian American poet from New York City and the author of Fractures (University of Wisconsin Press, 2020), selected by Natasha Trethewey as the winner of the 2020 Felix Pollak Prize in Poetry. A star of HBO’s Def Poetry Jam, Carlos is a proud papi of two.

Carlos Andrés Gómez will be reading the work of B. Batchelor, who is the co-founder of the Stillwater Writers Collective, member of the Minnesota Prison Writing Workshop, and has won multiple awards from the PEN America Annual Prison Writing Contest. His poetry has been published in Columbia: A Journal of Literature & Art, Cream City Review, the Laurel Review, and other journals. He is currently working on his debut poetry collection. Read an amazing interview with B. at pen.org/works-of-justice. You can write to him at bbatchelor0717@gmail.com.

Liza Jessie Peterson is an artivist; an actress, playwright, author, poet. Her critically acclaimed one woman show, The Peculiar Patriot, premiered at the National Black Theater in Harlem, was nominated for a Drama Desk Award and received a generous grant from Agnes Gund’s prestigious Art for Justice Fund. Liza performed The Peculiar Patriot in over 35 penitentiaries across the country over a span of three years. She recently performed it at Angola Stage Penitentiary in Louisiana for a live audience of over 700 men and was live streamed throughout the entire prison, which is currently in development for a documentary. Liza is author of ALL DAY; A Year of Love and Survival Teaching Incarcerated Kids at Rikers Island (Hachette publishing). She was featured in Ava Duvernay’s, The 13th, and was a consultant on Bill Moyer’s documentary, Rikers, (PBS). www.lizajessiep.com

Louise K. Waakaa’igan (Karol House) is enrolled at Odaawaa Zaaga ‘iganiing (Lac Courte Orielles) Reservation in northern Wisconsin. Louise is the recipient of the 2017 PEN Poetry first place prize for her poem, “This is Where.” She is the first-place winner of the Minnesota Prison Writing Workshop (MPWW) Broadside competition in 2016 with her poem, “Within.” Louise’s work has been published in PEN America’s 21 Mythologies; The Moon Magazine; Doors Adjacent; 27th letter; Words in Gray Scale; and The Asian American Writers’ Workshop: A World Without Cages. Her first collection of poems, This Is Where, will be published by Willow Books this spring.

Nicole Shawan Junior is a black, queer, and justice-involved counter-storyteller. Her writing appears in Emerge, the Lambda Literary Anthology, as well as Gay Mag, Zora, The Feminist Wire, Color Bloq, For Harriet, and more. A Bread Loaf & Hurston/Wright alum, Nicole’s received literary residencies and fellowships from various arts organizations including Hedgebrook, the New York Foundation for the Arts, Lambda Literary, and Sundress Academy for the Arts. Nicole’s completing Cracked Concrete: A Memoir of Crackheads, Cousins & Crime. She’s the creator of both the Roots. Wounds. Words. Writing Workshop & COUNTERpult – a Brooklyn-based reading series that centers QT/BIPoC storytellers.