Culture and Control: The Tightening Grip of Censorship in Xi’s China 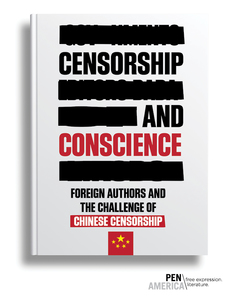 This event is free, but resgistration is requested. RSVP Now.

Please join us for a conversation with three of China’s leading literary dissidents about censorship, free expression, and creative freedom in China. Our special guests will discuss the boundaries on what can and can’t be said in China, the ways dissenting voices are silenced, and the effects of censorship on writers and readers. Moderated by Freedom House Asia Research Analyst Madeleine Earp.

Xiaolu Guo is an award‐winning novelist and filmmaker. Her latest novel I Am China deals with the consequences of Tiananmen through the love story of a musician and poet. Her feature films and documentaries include She, A Chinese, Once upon a time a Proletariat, and The Concrete Revolution, which received the Grand Prix at the 2005 International Human Rights Film Festival. In 2013, she was named one of Granta’s Best Young British Novelists.

Murong Xuecun is the pen name of Hao Qun, one of China’s first internet‐based writers. His Weibo account had 8.5 million followers before being shuttered by the government in 2013. A prominent advocate for free expression issues in China, Murong is a contributor to the International New York Times. His debut novel Leave Me Alone: A Novel of Chengdu was published online in 2002; the print version sold more than a million copies.

Bao Pu is a political commentator, human rights activist, and founder of New Century Press in Hong Kong, publishing books that have been banned in China, including memoirs of former party leaders. He is also the editor and translator of Prisoner of the State: The Secret Journal of Premier Zhao Ziyang.