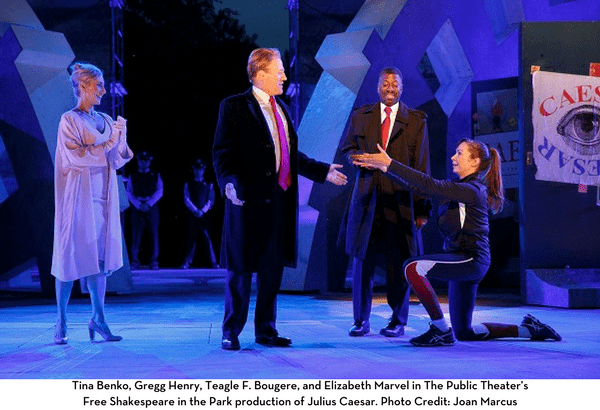 Doors and the bar will open at 6:15PM, the conversation will begin at 7PM.

In Shakespeare’s Julius Caesar, the titular character is assassinated by a crowd of senators who believe they can save democracy with their undemocratic actions, and instead bring about its downfall. When the same act was played out at the recent Free Shakespeare in the Park production of Julius Caesar, the production was rapidly embroiled in controversy, with Bank of America and Delta Airlines withdrawing financial support, and the National Endowment for the Arts releasing a public statement that NEA funds had not been awarded to the production.

Over the past couple of months there have been a number of incidents – some in the arts, some in the media – that raise important questions on whether we are now experiencing a chilling effect on free expression in America. Bolstered by social media and cable news, arguments against what is permissible – in the arts in particular – have come from all sides: corporate sponsors, media companies, activists on the right and the left. Is there a creeping consensus emerging that some art does go “too far?” Are there new cultural red lines we can no longer cross or should we fight for the right to ignore them?

Oskar Eustis, Artistic Director of The Public Theater and Director of Julius Caesar, joins cultural critic and poet Katha Pollitt (The Nation) and actor Corey Stoll (House of Cards, Julius Caesar) to answer the question: in this political era, are there artistic lines that can no longer be crossed? Moderated by Rebecca Carroll (WNYC), the discussion will tackle the question of how theatrical producers, philanthropic institutions, and writers choose to respond to a new dynamic.

Doors and the bar will open at 6:15PM, the conversation will begin at 7PM.

Oskar Eustis has served as the Artistic Director of The Public Theater since 2005.  Throughout his career, Eustis has been dedicated to the development of new plays as a director, dramaturg and producer.  His production of Julius Caesar won a Bay Area Critics Circle Award in 1988, and in the quarter century since then he has directed and produced Shakespeare across the United States, in venues ranging from prisons to Broadway. Photo of Oskar Eustis credit Aislinn Weidele

Katha Pollitt is well known for her wit and her keen sense of both the ridiculous and the sublime. Her “Subject to Debate” column, which debuted in 1995 and which the Washington Post called “the best place to go for original thinking on the left,” appears every other week in The Nation; it is frequently reprinted in newspapers across the country. Her most recent book is Pro: Reclaiming Abortion Rights, which The New York Times listed as a Notable Book of 2014. For her poetry, Pollitt has received a National Endowment for the Arts grant and a Guggenheim Fellowship.

Corey Stoll is an actor known for his role as Congressman Peter Russo in House of Cards, for which he received a Golden Globe nomination in 2013. He was a regular cast member on the NBC drama series Law & Order: LA, and portrayed Darren Cross (also known as Yellowjacket) in Ant-Man. Other notable roles include a 2004 Off-Broadway performance of Intimate Apparel, and portraying Ernest Hemingway in the 2011 romantic comedy film Midnight in Paris. He played Marcus Brutus in the Public Theater’s most recent production of Julius Caesar.  Photo of Corey Stoll courtesy The Public Theater

Rebecca Carroll is editor of special projects at WNYC, and a critic at large for the Los Angeles Times. She is a former contributing opinion writer for The Guardian, and her work has appeared in The New York Times, New York Magazine, Essence, Harper’s Bazaar, The New Republic and Ebony, among other publications. She is the author of five nonfiction books about race in America, including Sugar in the Raw and Saving the Race.  Photo of Rebecca Carroll credit Bo Jacober.