[VIRTUAL] Cracking Down on Creative Voices: Turkey’s Silencing of Writers, Intellectuals, and Artists Five Years After the Failed Coup 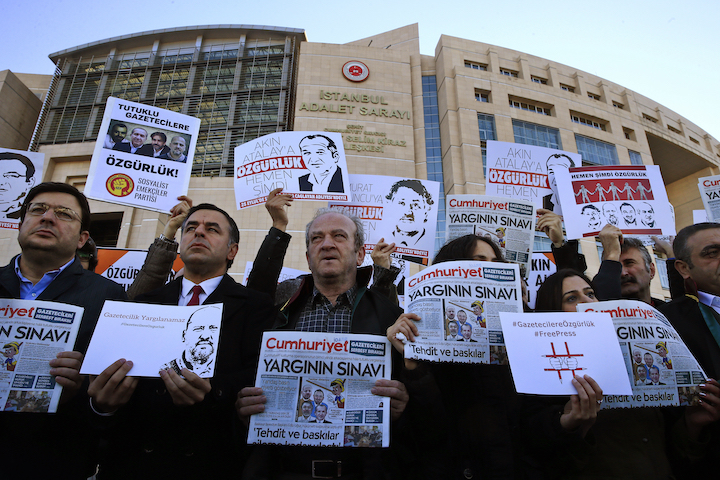 Demonstrators protest outside a court, where the trial of about a dozen employees of the Cumhuriyet daily newspaper on charges of aiding terror groups, took place in Istanbul, on October 31, 2017. Photo by AP/Lefteris Pitarakis

Since the attempted coup d’état in 2016, Turkish President Recep Tayyip Erdoğan has elevated his attacks on Turkey’s civil society to unprecedented levels, becoming one of the world’s foremost persecutors of freedom of expression. In the five years since the attempted coup, dozens of writers, activists, artists, and intellectuals have been targeted, prosecuted, and jailed; 29 publishing houses have been closed; over 135,000 books have been banned from Turkish public libraries; and more than 5,800 academics have been dismissed from their posts for expressing dissent. PEN America’s 2020 Freedom to Write Index found that Turkey was the world’s third highest imprisoner of writers and public intellectuals, with at least 25 cases of detention or imprisonment. This repressive climate has left writers and other members of Turkey’s cultural sector feeling embattled and targeted, unsure of what they can say or write without falling into their government’s crosshairs.

Please join PEN America, the Project on Middle East Democracy (POMED), and members of Turkey’s cultural, artistic, and literary communities in discussion of these trends and recommendations on how policymakers might respond to Erdoğan’s campaign of repression. The discussion will highlight PEN America’s upcoming report on freedom of expression in Turkey, which features interviews from members of Turkey’s literary, cultural, and human rights communities to better understand how this society-wide crackdown has affected freedom of expression within the country.

Karin Deutsch Karlekar is PEN America’s Director of Free Expression at Risk Programs. She has two decades of experience in global free expression, press freedom, and digital rights issues, as well as advocacy and assistance work on behalf of writers, bloggers, and journalists. Dr. Karlekar has developed index methodologies and conducted training sessions on press freedom, internet freedom, freedom of expression, and monitoring dangerous speech; authored a number of special reports and academic papers; and conducted advocacy missions across the globe.

Asli Erdoğan is a writer of literature and columnist, human rights defender, ex-political prisoner as well as a particle physicist. She is the author of eight books, novels, novellas, collections of poetic prose, and essays translated into more than twenty languages. She was arrested in 2016 for her collaboration with the pro-Kurdish newspaper Özgür Gündem. Aslı Erdoğan has received several prizes in literature and human rights such as Simone de Beauvoir Award, Karl Tucholsky Award, Erich Maria Remarque Peace Prize, Vaclav Havel Prize among others. Her work has been adapted into theater, classical ballet, radio, a short film and opera.

Asena Günal is a cofounder of Siyah Bant, a research platform that documents censorship cases in the arts in Turkey, and executive director of Anadolu Kültür, a nonprofit that promotes art and culture production across Turkey. Günal currently is also the program coordinator of Depo, a center for arts and culture in the Tophane neighborhood of Istanbul, and was previously an editor at İletişim Publishing House from 1998 to 2005. Günal is a winner of the 2019 Franco-German Human Rights and the Rule of Law Prize.

Burhan Sönmez is the author of five novels that have been translated into 42 languages. He was born in Turkey and grew up speaking Turkish and Kurdish. He worked as a lawyer in Istanbul before going to Britain as a political exile. His writing has appeared in papers including The Guardian, Der Spiegel, and la Repubblica. He received the Vaclav Havel Library Foundation’s “Disturbing the Peace” Award in 2017 and the EBRD Literature Prize in 2018. A Board member of PEN International, he divides his time between Istanbul (Turkey) and Cambridge (UK).

Caroline Stockford is a translator of Turkish poetry and literature and PEN Norway’s Turkey adviser. She has translated the poetry of classic and contemporary Turkish poets at the Cunda International Workshop for Translators of Turkish Literature for the past three years and is currently translating two Turkish novels and co-translating the poetry of Küçük İskender into Welsh.

Erol Önderoğlu is a Turkish-French journalist and representative of Reporters Without Borders (Reporters Sans Frontières, RSF). In 2016, he was arrested by the Turkish government under the accusation of assisting terrorists for his work supporting Ozgur Gundem, a Kurdish newspaper. In 2018, Önderoğlu received the Roosevelt Foundation’s Four Freedoms Award regarding freedom of speech, which cited his “tireless and persistent dedication to defend the freedom of speech and expression.”

Merve Tahiroğlu (moderator) is the Turkey program coordinator at the Project on Middle East Democracy (POMED), a Washington-based research and advocacy NGO focused on human rights and democracy in the Middle East. Prior to joining POMED, Tahiroğlu was a research analyst at the Foundation for Defense of Democracies, where she focused on Turkey’s domestic politics, foreign policy, and relationship with Washington. Tahiroğlu has authored several monographs on Turkey and published articles in various outlets such as Foreign Affairs, The Washington Post, The Wall Street Journal, Foreign Policy, POLITICO, NBC, and HuffPost. 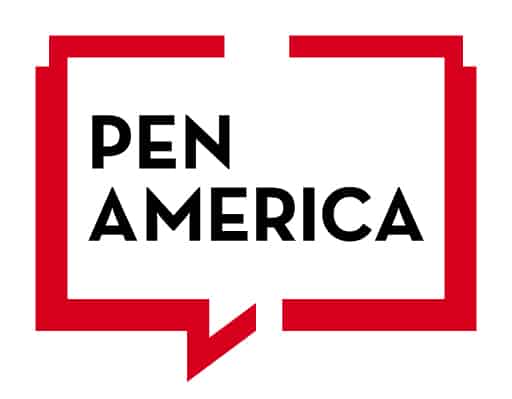