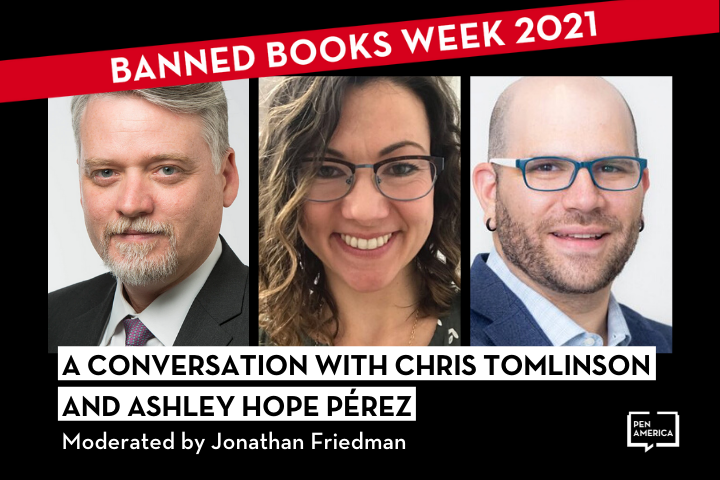 Writer and editor Chris Tomlinson (coeditor of Forget the Alamo) and young adult author Ashley Hope Pérez (author of Out of Darkness) came together for this special conversation to discuss recent threats to free expression in Texas. The discussion unpacked controversies including the recently canceled Forget the Alamo book event at the Bullock Texas State History Museum as well as the recent and expansive book ban in Texas’s Leander Independent School District, which includes Pérez’s Out of Darkness.

Chris Tomlinson is the author of two New York Times bestsellers and a columnist for the Houston Chronicle and the San Antonio Express-News. His latest book, Forget the Alamo: The Rise and Fall of an American Myth, was co-written with Bryan Burrough and Jason Stanford and deconstructs the Texas origin myth to reveal the truth behind the state’s legends. His previous bestseller, Tomlinson Hill: The Remarkable Story of Two Families who Share the Tomlinson Name-One White, One Black, examines the history of race in America from the family’s 1850s Texas slave plantation to the present day. Tomlinson writes commentary about energy, business, and policy three times a week, drawing on his 25 years of reporting experience.

Previously, Tomlinson was the supervisory correspondent for The Associated Press in Austin, responsible for Texas government and politics reporting. From 2001 to 2009, he was a foreign correspondent for The Associated Press and served as the East Africa bureau chief in Nairobi, Kenya. Tomlinson has reported from more than 30 countries, including Rwanda, Somalia, Afghanistan, Iraq, and Congo. Before becoming a journalist, he spent seven years in the U.S. Army. He graduated from The University of Texas at Austin in 1992 with special honors in humanities. Tomlinson currently serves on the board of advisers of the Texas Book Festival and two contemporary art organizations in Austin, Co-Lab Projects and The Museum of Human Achievement.

Ashley Hope Pérez is the author of three novels: Out of Darkness (2015), The Knife and the Butterfly (2012), and What Can’t Wait (2011). Out of Darkness was described by The New York Times Book Review as a “layered tale of color lines, love and struggle in an East Texas oil town,” and was selected as a best book of the year by both Kirkus Reviews and School Library Journal. It received a 2016 Michael L. Printz Honor for Literary Excellence in Young Adult Fiction, the 2016 Tomás Rivera Book Award, and the 2016 Américas Award. What Can’t Wait and The Knife and the Butterfly appear on YALSA’s Best Fiction for Young Adults and Popular Paperbacks lists. Pérez grew up in Texas and taught high school in Houston before pursuing a doctorate in comparative literature. She is currently assistant professor of world literatures at The Ohio State University and lives in Columbus, OH with her two sons.

Jonathan Friedman is the director of free expression and education at PEN America, where he oversees advocacy, analysis, and outreach to educational communities and academic institutions. In this role, he drives forward PEN America’s efforts to catalyze a more informed, civic culture through free expression education for the rising generation and the general public. Friedman served as lead author on PEN America’s 2019 report, Chasm in the Classroom: Campus Free Speech in a Divided America, and on the production of its digital Campus Free Speech Guide. He regularly provides commentary on campus free speech issues for national news media, has facilitated workshops, and has conducted advisory meetings with students, faculty, and administrators at dozens of colleges and universities across the United States.