[VIRTUAL] A Conversation on Race and Allyship in America 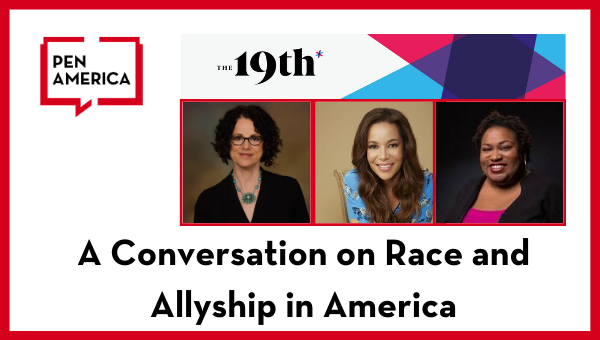 In partnership with The 19th, join PEN America for a live virtual panel discussion on race and allyship in America on Friday, August 14th at 1 pm CT.

This August, The 19th commemorates the suffrage centennial with The 19th Represents, a week of virtual events that raises the voices of women—past and present—who are reshaping the American story. This panel discussion will take place on the final day of programming to examine the intersection of race and gender in America and the role women must play in building a more equitable future.

The event will be held on Zoom. Register in advance of the event. The panel discussion will feature Robin DiAngelo, author, of White Fragility: Why It’s So Hard For White People To Talk About Racism in conversation with Brittney Cooper, author of Eloquent Rage: A Black Feminist Discovers Her Superpower. The conversation will be moderated by Sunny Hostin, cohost of The View.

Brittney Cooper is coeditor of The Crunk Feminist Collection (The Feminist Press, 2017). She is author of Beyond Respectability: The Intellectual Thought of Race Women (University of Illinois Press, May 2017) and Eloquent Rage: A Black Feminist Discovers Her Superpower (St. Martin’s, February 2018). In particular, this work interrogates the manner in which public Black women have theorized racial identity and gender politics, and the methods they used to operationalize those theories for the uplift of Black communities. Along with work on black female public intellectuals, Dr. Cooper studies Black women’s organizations as sites for the production of intellectual thought.

Robin DiAngelo has been a consultant, educator, and facilitator for over 20 years on issues of racial and social justice. She has worked with a wide range of organizations, including private, nonprofit, and governmental. Her book White Fragility: Why It’s So Hard For White People To Talk About Racism was released in June of 2018 and debuted on the New York Times Bestseller List, where it remained for 85 weeks. It is currently being translated into five languages.

Tens of thousands of people marched in Minsk and other Belarusian cities despite a threat from the Interior Ministry of the use of deadly force as protesters kept up their demand for the ouster of the authoritarian ruler. https://bit.ly/37lifdr

As local news dies, a pay-for-play network rises with a nationwide operation of 1,300 local sites publishes coverage that is ordered up by Republican groups and corporate P.R. firms. https://nyti.ms/3dNhHys