Writing in Exile: A Conversation with Jennifer Egan and Aleksandar Hemon 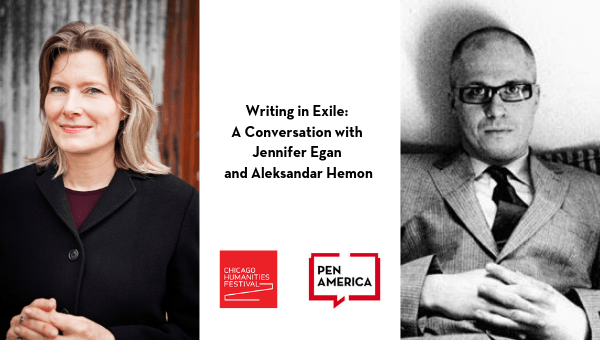 In partnership with the Chicago Humanities Festival, PEN America brings you a conversation about what it takes to secure the space and freedom to write, even in exile, as well as the current threats to freedom of expression. Join PEN America President and the Pulitzer-prize winning and Chicago-born writer Jennifer Egan in a discussion with novelist Aleksandar Hemon as we explore what it means to live in exile, particularly as a writer.

Jennifer Egan is a Pulitzer-Prize winning writer and the President of PEN America. Her most recent work, Manhattan Beach, won the 2018 Carnegie Medal for literary excellence and was recently selected as the One Book, One New York City-wide read. She is also the author of A Visit from the Goon Squad, which won the 2011 Pulitzer Prize, the National Book Critics Circle Award for Fiction, and the Los Angeles Times Book Prize. Other works include: The Invisible Circus, a novel that became a feature film starring Cameron Diaz in 2001; Look at Me, a finalist for the National Book Award in fiction in 2001; and The Keep. Her short stories have appeared in The New Yorker, Harper’s, Granta, McSweeney’s, The Best American Short Stories, and other magazines and collections. She is a recipient of a Guggenheim Fellowship, a National Endowment for the Arts Fellowship in Fiction, and a Dorothy and Lewis B. Cullman Fellowship at the New York Public Library. Her non-fiction articles appear frequently in The New York Times Magazine, and her 2002 cover story on homeless children received the Carroll Kowal Journalism Award. Her article “The Bipolar Kid” received a 2009 NAMI Outstanding Media Award for Science and Health Reporting from the National Alliance on Mental Illness. She was born in Chicago and raised in San Francisco.

Aleksandar Hemon is the author of The Lazarus Project, which was a finalist for the 2008 National Book Award and National Book Critics Circle Award, and three collections of short stories: The Question of Bruno; Nowhere Man, which was also a finalist for the National Book Critics Circle Award; and Love and Obstacles. His other works include a book of nonfiction, The Book of My Lives; The Making of Zombie Wars, a novel; journalism, screenplays, and content for the Netflix original show Sense8. Born in Sarajevo, Hemon visited Chicago in 1992, intending to stay for a matter of months. While he was there, Sarajevo came under siege, and he was unable to return home. Hemon wrote his first story in English in 1995. He was awarded a Guggenheim Fellowship in 2003 and a “genius grant” from the MacArthur Foundation in 2004. Hemon has taught at Northwestern University and New York University.