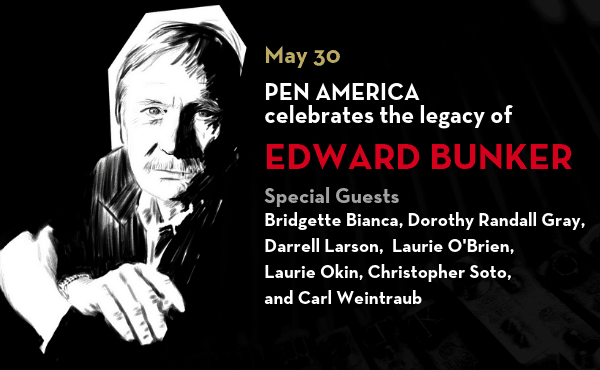 PEN America is thrilled to share The Edward Bunker Prize in Fiction, a newly named award in PEN America’s three-decade-running Prison Writing Contest, which celebrates and recognizes excellence in writing by incarcerated writers.

Listen to the winners of the Edward Bunker Prize in Fiction:

Listen to the panel talk about Edward Bunker’s life and legacy: 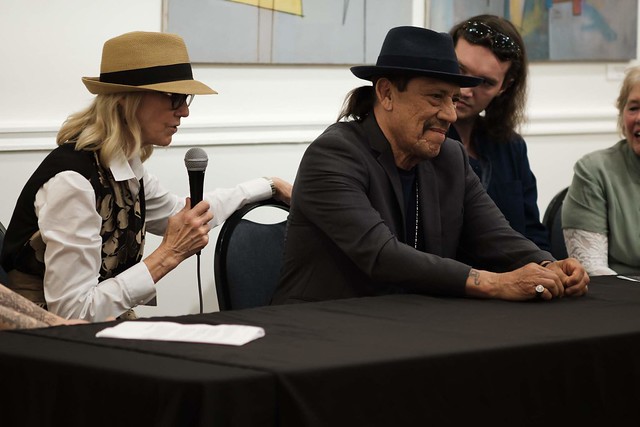 Edward Heward Bunker (December 31, 1933 – July 19, 2005) was an American author of crime fiction, a screenwriter, and an actor. Bunker wrote numerous books— some of which have been adapted into major motion pictures featuring prominent actors such as Dustin Hoffman and Jon Voight— and was a screenwriter on Straight Time (1978), Runaway Train (1985) and Animal Factory (2000). Bunker also appears on screen as an actor in a number of films, most famously as Mr. Blue in Reservoir Dogs. And like many of the writers who reach out to the PEN America Prison and Justice Writing Program, Mr. Bunker was involved with the justice system for decades before finding significant success as a writer and actor.

The PEN America/Edward Bunker Prize in Fiction awards the work of a cohort of incarcerated fiction writers who show exceptional talent and merit in the genre, and honors Mr. Bunker’s work in illuminating the tenacious path from the identity of prisoner to writer. We are proud to celebrate not only Mr. Bunker’s contribution to letters and film, but also his continued influence on a new generation of writers who show deep dedication to, and passion for, the craft of writing, and a compelling creative vision.

bridgette bianca is a poet and professor from South Central Los Angeles. She has performed her poetry all around Southern California, including features at the World Stage, the SoCal Poetry Fest, LA Lit Crawl, LitFest Pasadena, the Table Lit, and the un::fade::able Reading Series. She is one half of the literary curating team, Making Room for Black Women, with Sanura Williams of My Lit Box. bridgette bianca’s work as a writer and an educator seeks to serve the people and moments most forget or ignore. Her first book of poetry will be released by Writ Large Press in 2020.

Darrel Larson is an actor, director, writer, and teacher. He has directed more than 50 plays and has appeared in hundreds of television shows. Currently, he is teaching an ongoing workshop called ActingShepard, focused on the work of Sam Shepard, at The Yard Theater.

A teacher and global activist, Dorothy Randall Gray is author of the bestseller Soul Between The Lines: Freeing Your Creative Spirit Through Writing (Avon/HarperCollins). Her other publications include Muse Blues, Woman, Fierce With Reality, Family, The Passion Collection, A Taste of Tamarinda, and her latest, Sharing The Same Sky. Dorothy’s passion for the creative inspired her to establish the Heartland Institute for Transformation, an outreach organization dedicated to utilizing the arts for global healing, social change, and personal empowerment. Under the Heartland umbrella she offered educational assistance to African schools, creativity workshops at juvenile detention facilities, Skid Row populations, post-graduate students and professional authors. A former NPR commentator, she is presently executive director of Women Writers & Artists Matrix, an association of kindred creative women dedicated to shifting the paradigm through words and images.

Laurie O’Brien’s theatre, television and film career has given her the opportunity to play roles ranging from lunatics and white trash to the most beautiful woman in the world (Helen of Troy in The Greeks) and a prima ballerina (Lake Anne). Favorite roles include Paulina in the remake of the movie The Defiant Ones, Denise Savage in Savage in Limbo (Los Angeles Drama Critics Circle Award), Mary Barnes in Mary Barnes (LADCC Award), Virginia in The Clean House, Meta in Times Like These (Ovation Award), Nat in Rabbit Hole and most recently Queen Elizabeth in Shakespeare in Love. Laurie has been featured as an emerging writer in The New Fiction Series, was a finalist in Glimmer Train’s Family Matters contest. And wrote and performed I Am Chrissie, a one woman show based on her work running theatre workshops in mental hospitals and juvenile detention centers in the ‘70s.

Laurie Okin grew up in Massachusetts, where she earned her bachelor’s degree in theater (with a minor in Spanish) before heading west. She is a proud member of SAG/AFTRA and AEA, and has been seen in dozens of national commercials, as well as episodes of The Office, Friends, Samantha Who? and MadTV, and a PBS pilot entitled Copshop in which she starred opposite Richard Dreyfus, Rose Perez and Rita Moreno. She has performed in the Groundlings Sunday Company and ComedySportz, and has taught improv. Her one-act play, The Class, was included in The Road’s summer playwright festival in 2016, and she is now writing a feature with partner Tom Musgrave entitled Dale’s Pizza. Currently, she splits her time between her pursuit of more acting and writing work, and spending time with her family, raising two amazing children named Rose and Jack, and running the garden at their elementary school.

Christopher Soto is a poet, editor, and prison abolitionist. He has taught writing to incarcerated youth in Los Angeles, pen-paled with LGBTQ prisoners, and for the past three years has been working with a national organization working to end the death penalty. He is currently working on his first full-length poetry collection about police violence and mass incarceration.

Carl Weintraub began his professional acting career at The Old Globe Theatre in San Diego in 1974. A graduate of UCLA, Carl studied improvisation with Lou Palter and has performed at such theatres as The Mark Taper Forum and the LA Theatre Company and starred in a few television series, including Dads, Cagney & Lacy, and Days of Our Lives. along with countless other roles on stage and screen. Carl was the first recipient of the Los Angeles PASA Award for life achievement in professional artistry in schools and was the first actual artist ever to receive the Los Angeles Music Center’s Bravo Award for achievement in arts education. All this because he founded We Tell Stories, a story-type theatre company that has been performing across America since 1981. Carl also co-produces and curates BackStory, a bi-monthly storytelling series at the Victory Theatre in Burbank. In parallel lives Carl has been a probation officer and a social worker, a mushroom farmer and a mason. He’s taught school, cleaned latrines, played guitar and sung the blues in bars for money. His children are aged 29, 42, 49 and 52 with 5 grand-kids. He’s broken his back three times and his nose five. He tells stories.