This event will be held at the Museum of the City of New York, 1220 Fifth Avenue, New York. 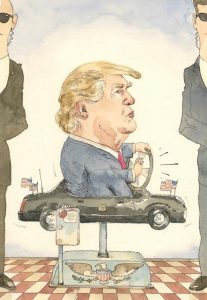 Since November 9th, activists and artists have come together to respond to Donald Trump’s presidency. At the forefront of the discussion due to the visibility of their work, cartoonists have responded in a remarkable fashion to the new regime. Published in newspapers, magazines, and online forums, these artists have already been responsible for creating indelible images of President Trump and commenting on his vision of the world. Join us for a discussion with some of today’s most thoughtful — and provocative — cartoonists and artists, moderated by Liza Donnelly.

Buy your tickets here. Use code PEN23 for a special discount.