Campus at a Crossroads: Free Speech, Truth, and Democracy in an Election Year 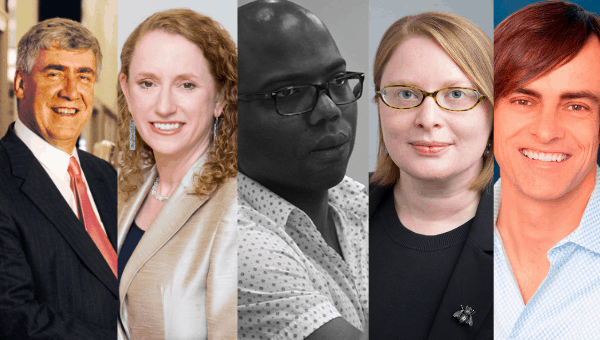 With the 2020 election season picking up steam, debates over free speech, truth, and the university are of increasing relevance to the health of American democracy. But in an era of deepening polarization, many see these issues through partisan eyes, shouting into fractured echo chambers. Campuses seem to be at a cross-roads—can they restore a common understanding of facts, and of the rules of engagement and disagreement? Or are they in danger of buckling under the weight of our current culture war?

Co-sponsored by PEN America and NYU’s Center for the Humanities and Institute for Public Knowledge, this panel aims to bring together academics, writers, and students for a spirited discussion of these issues. The panel will also serve to launch PEN America’s new Campus Free Speech Guide, an online resource offering a range of tips on contemporary challenges related to free speech on campus. Through the event, we aim to situate the guide in a larger discussion about universities’ responsibility in pursuing and defending truth in a political climate in which the very concept of truth is under attack, and the ways in which issues surrounding free expression, academic freedom, and diversity and inclusion intersect with that responsibility.

Please note that doors open at 6:15pm and seating is limited. RSVP is required, but does not guarantee admission. No late seating.

Ulrich Baer is University Professor of German and Comparative Literature in the Faculty of Arts and Sciences. He received his BA from Harvard University and his PhD from Yale University before joining the faculty of NYU in 1995. He is a widely published author, editor, and translator, and an expert on modern poetry, contemporary photography, literary theory, and philosophy. Among his many publications are Remnants of Song: Poetry and the Experience of Modernity in Charles Baudelaire and Paul Celan (2000); Spectral Evidence; The Photography of Trauma (2002); 110 Stories: New York Writes After September 11 (2002); Rainer Maria Rilke: Letters on Life (editor and translator; 2005), The Claims of Literature: The Shoshana Felman Reader (co-editor with Emily Sun and Eyal Peretz; 2007); The Rilke Alphabet (2014), and Beggar’s Chicken: Stories from Shanghai (2013). Uli has been awarded a Guggenheim Fellowship, a Getty Fellowship, an Alexander von Humboldt Fellowship, and twice been honored by the NYU Faculty of Arts and Science Golden Dozen teaching award. He writes regularly on photography as a critic and commentator.

Rich Blint is a scholar, writer, and curator. He is Assistant Professor of Literature in the Department of Literary Studies, and Director of the Undergraduate Minor in Race and Ethnicity at the Eugene Lang College of Liberal Arts, The New School. He is co-editor (with Douglas Field) of a special issue of African American Review on James Baldwin (2014), and wrote the introduction and notes for the eBook Baldwin For Our Times: Writings from James Baldwin for a Time of Sorrow and Struggle (Beacon Press 2016). Upcoming books include A Radical Interiority: James Baldwin and the Personified Self in Modern American Culture, and A Queer Spirit: Incidents in the Life of the Americas. He is also editor of the forthcoming Cambridge African American Literature in Transition, 1980-1990. His writing has appeared in Anthropology Now, African American Review, The James Baldwin Review, McSweeney’s, The Brooklyn Rail, sx visualities, and the A-Line: a journal of progressive thought where he serves as editor-at-large. Curatorial projects include Renee Cox: Revisiting The Queen Nanny of the Maroons Series at Columbia University (2016), The Devil Finds Work: James Baldwin on Film at The Film Society of Lincoln Center (2015), The First Sweet Music at the John and June Alcott Gallery, Hanes Art Center (2014), and Bigger Than Shadows at DODGEgallery, New York (2012; with Ian Cofre). He has received fellowships from the Andrew W. Mellon and Woodrow Wilson National Fellowship foundations.

Suzanne Nossel is chief executive officer at PEN America. Prior to joining PEN America, she served as the chief operating officer of Human Rights Watch and as executive director of Amnesty International USA. She served in the Obama Administration as deputy assistant secretary of state for international organizations, leading U.S. engagement at the United Nations and multilateral institutions on human right issues, and in the Clinton Administration as deputy to the U.S. ambassador for UN management and reform. She is a featured columnist for Foreign Policy and has published op-eds in The New York Times, The Washington Post, and the Los Angeles Times, as well as scholarly articles in Foreign Affairs, Dissent, and Democracy, among others. Nossel serves on the board of directors of the Tides Foundation. She is a former senior fellow at the Century Foundation, the Center for American Progress, and the Council on Foreign Relations. Nossel is a magna cum laude graduate of both Harvard College and Harvard Law School.

Jeremy Waldron teaches legal and political philosophy at NYU School of Law. Until recently, he was also Chichele Professor of Social and Political Theory at Oxford University (All Souls College). A prolific scholar, Waldron has written extensively on jurisprudence and political theory, including numerous books and articles on theories of rights, constitutionalism, the rule of law, democracy, property, torture, security, homelessness, and the philosophy of international law. His books include Dignity, Rank, and Rights (2012), Partly Laws Common to All Mankind: Foreign Law in American Courts (2012), The Harm of Hate Speech (2012), Torture, Terror, and Trade-offs: Philosophy for the White House (2010), Law and Disagreement (1999), and The Dignity of Legislation (1999). He has taught at the University of Edinburgh; the University of California, Berkeley; Princeton University; and Columbia Law School. Elected to the American Academy of Arts and Sciences in 1998 and a fellow of the British Academy since 2011, Waldron has given many prestigious academic lectures, such as the Tanner Lectures at Berkeley in 2009, the Holmes Lectures at Harvard Law School in 2009, the Hamlyn Law Lectures in England in 2011, and the Gifford Lectures in Edinburgh in 2015.

Lee Rowland is a career-long civil liberties attorney and advocate with extensive experience as a litigator, lobbyist, educator, and public speaker. She currently serves as the Interim Policy Director at the New York Civil Liberties Union, overseeing the organization’s non-litigation advocacy and legislative work on a broad range of civil rights and civil liberties topics. She joined the NYCLU in 2018 (although she is a lifer of the ACLU and its affiliates), and manages more than a dozen employees in the NYCLU’s Policy Department. Before coming to the NYCLU, Rowland was a senior staff attorney with the ACLU’s Speech, Privacy, and Technology Project, where she helped steer the ACLU’s free speech work. Rowland has also been a teacher, both as an adjunct clinical professor for New York University School of Law’s Technology Law and Policy Clinic and an adjunct faculty member in the Human Rights Program at the Roosevelt House Public Policy Institute at Hunter College. Rowland is a graduate of Middlebury College and Harvard Law School.

Are you an organization defending the rights of cultural professionals or artists? Artists at Risk Connection (@atriskartists) is dedicated to connecting artists with the services they need to navigate challenging circumstances. Join their network: https://artistsatriskconnection.org/join

For years, PEN America has equipped writers and journalists with strategies and resources to defend themselves and others through our Field Manual, in-person training seminars, and virtual events. Today, join us to #FightOnlineAbuseNow. Sign our petition: https://bit.ly/FightOnlineAbuseNow.